That’s right, the original, best, and biggest time based festival/competition  is set to take over an unsuspecting Stumptown again, and registration is now open!   Just go to www.48hourfilm.com/portland_oregon to register a team today!

The world premieres of all the short films are August 7 & 8 at The Hollywood Theatre.

AND, on August 21, we will present “The Best of Portland”.  This screening will showcase the creme de la creme of this year’s PDX 48HFP.

In case you are unfamiliar with the PDX 48HFP, On Friday, August 2nd, teams of filmmakers will draw their genre from The Cruel Hat of Fate, and each team will be assigned the Character, Prop, and Line of Dialogue for this year.  Continue reading... “Portland 48 Hour Film Project Returns August 2 – 4!!”

IT TAKES A VILLAGE TO RAISE A FILM FESTIVAL

EOFF provides a quality of life component to our valley that is essential in attracting visitors, professionals, and businesses to the Grande Ronde Valley– in addition to stoking community passion for arts and culture. The band of volunteers that have worked tirelessly to bring this exciting, educational, and dynamic weekend of independent film and music have already rolled up their sleeves in preparation for a landmark 5th year event to be held February 20-22, 2014. 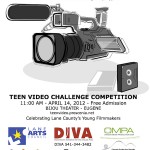 DIVAs Youth Visions program is pleased to host the 2012 Teen Video Challenge Competition with a screening of entries and winning videos. Each year teens from all over Lane County submit work that is reviewed by a panel of video professionals and educators. Winning videos will be awarded certificates and cash prizes at this years event. This year 16 videos representing a wide range of film themes will be screened and include animation, documentary, music video, and narrative film categories. Continue reading... “Teen Video Challenge – Eugene”

The 48 Hour Film Project is back in Stumptown August 5-7! That’s right, from August 5-7, the pressure cooker of creativity that is the 48HFP will explode once again in Portland. Early Bird Registration Ends this Monday July 11th, so register now to save a few bucks .

You can sign up at http://www.48hourfilm.com/portland_oregon
I’m pleased to announce that all films will screen at the beautiful and historic Hollywood Theatre again this year, and the big Portland winner will go head to head with other city winners in a no-holds barred, cage match to determine the best 48 Hour Film of 2011. Continue reading... “2011 Portland 48 Hour Film Project Early Bird Registration Ends Monday July 11”

Shawn Levy (The Oregonian) has been busy blogging from Sundance with the roundup of the fantastic showing of Oregon made films and documentaries that have been screening, check it out here.

They  were not the only Oregon products featured at Sundance this year – Troon Vineyard (located in the beautiful Applegate Valley near Grant’s Pass) was selected to pour at the Sundance opening ceremonies.  They served; Troon 2009 Viognier, 2007  River Guide White and 2009 Druid’s Fluid Red and 2007 Kubli Bench Cabernet Sauvignon.  Continue reading... “Sundance Round Up And Oregon Wine”

Eugene, OR. The DIVA Center is hosting the last two programs in a four part “Best Of” the Archaeology Channel International Film and Television Festival series this weekend.

Eugene, OR. “Flickering Images and Silver Screens” is the theme of a special DIVA Center open house event during the First Friday Art Walk from 5:30PM to 8:00 PM on August 6th.  The Center will be hosting an informational evening showcasing many of the area’s film organizations that present film festivals, teach about film, and promote professional film, video, and media arts production. Continue reading... “DIVA Center to Host “Flickering Images and Silver Screens” Open House Showcasing Area Film Community”

Eastern Oregon Film Festival in conjunction with Crossing the Blues: La Grande Summer Festival is pleased to present the 3rd annual La Grande Summer Film Project. The project will kick off on Friday August 13th, with a Night Life social event at White House Coffee (1702 Fourth Street). Teams will be identified, organized, and specific criteria for their film will be given. After the participants have had a chance to “schmooze”, ACTION will be called at 9:00pm – and the filmmakers have 48 hours to deliver their final project. Continue reading... “La Grande Summer Film Project: Community Filmmaking Opportunity”