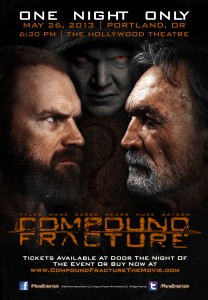 The BendFilm Festival will be taking place October 11-14, 2012 in Bend, Oregon.  Tickets for the festival are now available online.

“We’re selling tickets earlier than ever this year and anticipate a great response from members and the general public. Buzz has been building about our films and parties, including the resurgence of a dance party, which will be held at our newest venue, the Cascade Theatrical Company, on Friday night of the festival featuring DJ Bryan Swett.”

The 48 Hour Film Project is back in Stumptown August 5-7! That’s right, from August 5-7, the pressure cooker of creativity that is the 48HFP will explode once again in Portland. Early Bird Registration Ends this Monday July 11th, so register now to save a few bucks .

You can sign up at http://www.48hourfilm.com/portland_oregon
I’m pleased to announce that all films will screen at the beautiful and historic Hollywood Theatre again this year, and the big Portland winner will go head to head with other city winners in a no-holds barred, cage match to determine the best 48 Hour Film of 2011. Continue reading... “2011 Portland 48 Hour Film Project Early Bird Registration Ends Monday July 11”

Civic Stadium, built in 1938 as a WPA project in Eugene, Oregon, is a rare historic resource and is on the National Register of Historic Places.  This classic wooden grandstand, which seats about 7000, has been a community catalyst for generations, but now is threatened with demolition.  Its story is the story of countless cultural heritage sites around the world, of which some of which have been protected and many have been lost. Whatever happens to it, we intend to make a documentary film about the place and its community significance so that future generations will know what we had.  Continue reading... “Kickstarter Campaign for Civic Stadium Film Terminates at End of June”