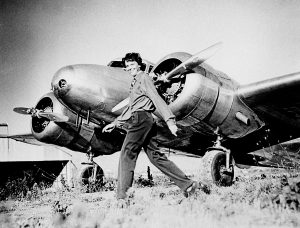 You can help our ALI film crew join the search for Amelia Earhart!  Our Indiegogo fundraising campaign begins September 19 and will last just one month.  The funds will pay for us to secure a place on the expedition ship and film the research team in June and July 2017 as they voyage to the Pacific island of Nikumaroro, where Amelia very likely landed and survived for a time in 1937.  This expedition, which includes some serious archaeological fieldwork, could bring home conclusive evidence that the famous aviatrix was there.  Continue reading... “Amelia Earhart fundraiser to launch 9/19/16”

Civic Stadium, built in 1938 as a WPA project in Eugene, Oregon, is a rare historic resource and is on the National Register of Historic Places.  This classic wooden grandstand, which seats about 7000, has been a community catalyst for generations, but now is threatened with demolition.  Its story is the story of countless cultural heritage sites around the world, of which some of which have been protected and many have been lost. Whatever happens to it, we intend to make a documentary film about the place and its community significance so that future generations will know what we had.  Continue reading... “Kickstarter Campaign for Civic Stadium Film Terminates at End of June”