Join other artists, creators, communicators, business professionals, and explorers, who want to hone and develop their skills in filmmaking.

Winter classes begin with a $10 Super Saturday Workshops on January 5, which includes Avid for Final Cut Users and Sound Doctor. Core & topic classes begin January 14 and include Art of Film I, Screenwriting Intensive, and Video Production in the Workplace. 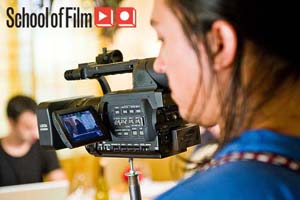 That’s what you keep telling yourself. Well, why wait another year or another day?

The Northwest Film Center School of Film is offering an array of weeknight and weekend hands-on classes, starting throughout January.  Write that romance you’re always thinking about, launch that documentary, meet other aspiring makers and creatives, get a leg up on entry level opportunities within the film scene, animate with an Oscar-winning director, or geek out with Super 8mm film (they still do that? YES!) and other technical workshops. Continue reading... “Stop Talking about your Film and Make It.”

Eastern Oregon Film Festival in conjunction with Crossing the Blues: La Grande Summer Festival is pleased to present the 3rd annual La Grande Summer Film Project. The project will kick off on Friday August 13th, with a Night Life social event at White House Coffee (1702 Fourth Street). Teams will be identified, organized, and specific criteria for their film will be given. After the participants have had a chance to “schmooze”, ACTION will be called at 9:00pm – and the filmmakers have 48 hours to deliver their final project. Continue reading... “La Grande Summer Film Project: Community Filmmaking Opportunity”

Heard about the new DSLR cameras? Know how to use them for video projects? Learn to shoot with DSLR cameras and explore this format. You’ll pick an iconic place in Portland and use a DSLR camera to piece together compelling shots, timelapse, and other visual effects to create a short edited piece. Intermediate to advanced FCP skills required.

The Democratization of 3D Cinematography
Wednesday, April 28, 2010 from 6:00  – 8:30 PM
Presented by Cascade ACM SIGGRAPH and The 3D Center of Art and Photography

Ever wonder what it would be like to make a 3D movie using open source software, readily available digital cameras, school resources, your computer and some imagination?  Attend this event and learn how two people with the same question in mind discovered desktop 3D film-making. Ron Kriesel and Kathleen O’Reilly, Board Members of the 3D Center of Art and Photography will walk you through their process and work-flow when making their first 3D film. Continue reading... “3D Cinematography Workshop Sponsored by ACM SIGGRAPH and the 3D Center”

Members of the entertainment industry have a unique opportunity to take control of their careers by producing their own content for the internet.  Applying your creativity in the new media space has never been easier.  Join the Screen Actors Guild New Media Department and prominent digital entertainment leaders as they share essential tips on producing respectable, signatory online content. Continue reading... “SAG Workshop: New Media 101”