For the next video of the series (above), the Oregon Film Summer Interns talk to both Bent Image Lab and Hive-FX about their recent animation and visual effects (VFX) work.

With the consistent production of successful animation and VFX work in Portland, Bent Image Lab and Hive-FX are among the most active and respected animation/VFX companies in the state. They define the talent in Oregon, and set the bar high. With high-profile clientele and big-contract work, both companies have earned impressive international reputations.

VFX Revolution: How the Internet and Digital Devices are Reshaping Visual Effects and Film

Anyone with an interest in VFX will not want to miss this opportunity to see and hear first hand what is currently going on directly from some current experts in the field.  In less than 40 years, computer graphics and digital devices have transformed film experience with techniques such as digital compositing, motion control, computer-generated characters and photo-realistic images incorporated into live-action footage. Continue reading... ““VFX Revolution” May 17th – Presented by WebVisions” 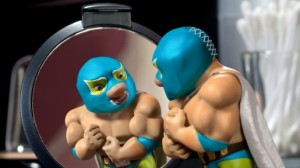 If you’ve ever watched IFC then you’ve seen their signature quirky-cool ad campaign. But did you know that it was designed and created by Oregon-based Feel Good Anyway? Or that the 40+ special effects in the NBC movie “A Walk in My Shoes” were done by Portland’s visual effects company Hive-FX? Or if you’ve been to Canada lately and seen Koodo Mobile’s adorable spokesman El Tabador, that he was produced by Bent Image Labs based in – you guessed it – Oregon? Continue reading... “Wait, That Was Done In Oregon?”

Filmed entirely in and around Portland, A Walk In My Shoes tells the story of a stressed-out high school teacher who wrecks her car and finds herself living in the shoes of the mother of one of her students – a woman she had previously judged and criticized. The movie features over 40 special effects sequences used to underscore the ‘magic’ in the storyline – all of which were created by www.hive-fx.com at its Portland-based headquarters.   “Our contribution to this great movie goes to prove that you don’t have to go to Hollywood to get Hollywood-grade VFX,” said HIVE-FX partner Jim Clark. Continue reading... “Case Study: Hive FX brings VFX sizzle to “A Walk in My Shoes””