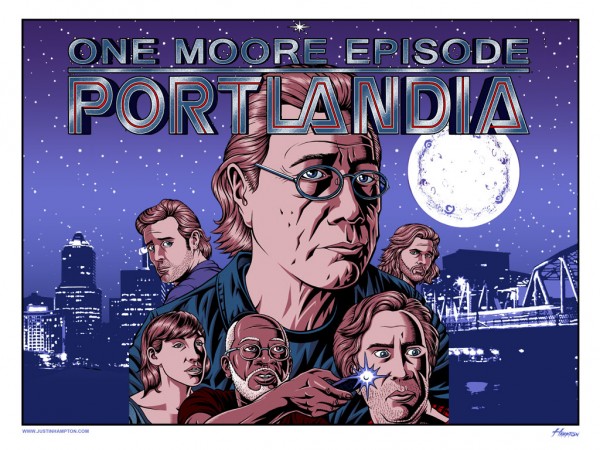 Today the Emmy Nominations were announced and “Portlandia” came away with two big nominations.  The show was nominated for Outstanding Writing for a Variety Series.  Writers Fred Armisen, Carrie Brownstein, Jonathan Kreisel and Karey Dornetto were all listed in the nomination.  The show was also recognized for Outstanding Directing in a Variety Series thanks to Jonathan Kreisel’s amazing direction.  The episode Jonathan was recognized for was “One Moore Episode” which was voted by the fans as the best episode to date.  Continue reading... “Portlandia receives 2 Emmy Nods, Weiden + Kennedy receives 3”

Isn’t it fun talking about “the future”?  Well this past spring Intel Labs, the Portland Incubator Experiment, Weiden + Kennedy and the Governor’s Office of Film and Television decided to spend a weekend in May looking into the future of narrative storytelling.  We reached out to 16 different creative professionals with their own unique expertise from both Oregon and around the country to spend a Saturday in W+K’s offices and literally dream up a new form of storytelling.  The group was broken into four teams and were told to use one of two existing properties – SyFy Channel’s “Haven”, and Daniel Wilson’s novel “Robopocalypse”.  Continue reading... “Intel, Portland Incubator Experiment, W+K, and Oregon Film come together for a “Narrative Hack””

Last year Portland’s powerhouse ad agency Weiden + Kennedy made waves with their Chrysler commercial featuring Eminem.  This year it was Clint Eastwood.  (I can’t embed the clip so here’s the link) http://www.youtube.com/chrysler?sid=1037056&KWNM=chrysler+commercial&KWID=3179744957SB_2012&channel=paidsearch The spot which aired at halftime of the Superbowl was almost as much of a pep rally as it was a commercial.  It’s already received a lot of buzz and sure to continue through the week.  W+K also scored with several Coca Cola commercials featuring their animated Polar Bears.  Continue reading... “Superbowl Ads Once Again Have an Oregon Connection”

This past year Portland Headquartered Ad Agency Weiden + Kennedy had a realization.  They needed to be better connected to innovative tech startups.  So what did they do?  They freed up some office space and started their own startup incubator called the Portland Incubator Experiment.  With the help of several brands including Coca-Cola, Target, and Google, W+K invited entrepreneurs to apply for a three month stay along with $18,000 and access to some top mentors in the startup world.  Today at Portland’s Bagdad Theater, the first round of companies will present their ideas and products to potential investors, media, and the public. Continue reading... “MoPix – Setting out to Create a Post-DVD Experience – Demos at PIE Demo Day”

I just came across this interesting talk from two Weiden + Kennedy employees talking about the future of creative business.  I found it very interesting and worth watching.  Weiden + Kennedy over the past few years have been pushing the envelope of what a creative advertising agency does and the results have been very successful.  So check out Dan Hon and Nick Barham and hear what they have to say.

-Vince Continue reading... “Weiden + Kennedy: The Future of Creative Business – check it out!”

I saw a tweet from W+K today and immediately got immersed with Ian Tait’s presentation on this website.  He was speaking recently in London at the Creativity and Technology conference.  I HIGHLY RECOMMEND that every creative professional in Oregon check this out.  Ian joined W+K a year or so ago after success in the digital media industry in London.  I think he’s a real visionary and someone I hope will be a great asset for our local community.

Much of what Ian touches on is an extension of what we tried to cover at “The Brave New World of Media” event a few weeks ago and it’s reassuring that someone of Ian’s status in on the same track as many others in Oregon.  Continue reading... “Check out W+K’s Ian Tait’s Presentation – it’s good!”