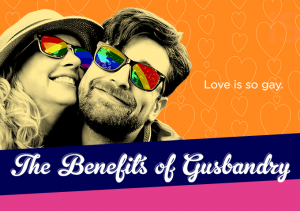 Voted “Best Local Web Series” by the readers of Willamette Week and completely made in Portland by Portland people, digital series The Benefits of Gusbandry can now be BINGE WATCHED on Amazon Prime and Seed & Spark Cinema!  Stream, review and share today!

Dive into the laugh packed 77 minutes of Season One, and see why the NY Times praised the show for its “sharp writing and spirited performances…” –  lauding the season finale as “…A delirious 16 minute masterpiece of pretension puncturing.” Continue reading... “Binge & Back The Benefits of Gusbandry”

Got a unique film project that contributes to society?  The Roy W. Dean Film Grant is looking to award its grant to one that fits that description.  This year’s winner receives $3,500 cash and $30,000 in donated film products and services to help complete their film.  Films can be documentaries, short films, features, TV or web series. Deadline for submission is June 30th, 2016.

D explores issues like honey health facts, colony collapse disorder, infant botulism, sex practices of the species, as well as get’s personal – a slew of “This or That’s” outline one of the great contributing community members of La Grande, Oregon.

A lot of questions, a lot of info, a lot of laughs, support local foods systems with local honey. Continue reading... “The D-Sandwich Interviews: Refreshing Eastern Oregon's Sense of Humor”

Giving birth to a widely-hailed western fantasy like the Oregon-produced web series Animus Cross is a massive undertaking that could easily be derailed – especially when a birth of a different sort occurs!

When series creator A.L. Steen gave birth to her and husband Jerry Buxbaum’s first child, Trone, on February 11, 2010 the show’s fans congratulated her.  As time has gone on, however, there have been rumbles of concern that the Series II of the wildly popular internet series would be delayed. Continue reading... “New Addition To Animus Cross Family Won’t Delay Series Launch”

Remember Nicholas J. Hagen? He directed that film I mentioned a few posts back, Dark Horizon. Well, Nick’s always got something going on… last year, he shot the pilot for a new “Mocumentary-style” TV comedy called The Paranormalists. He pulled together some of the best actors in Portland for the cast, including my friend and frequent collaborator Mercedes Rose, Todd Robinson, Jennifer Skyler, Richard Topping, and Darius Pierce.