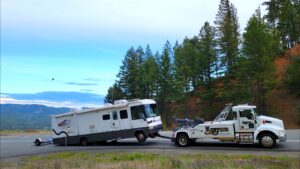 My wife and I are career Youtubers. We travel the country in a 34′ class A Winnebago, documenting our adventures all the way. Between us, we host three channels. I am That Nate Guy on YouTube, Marion is Life Unboxed, and together we are Romancing The States. We recently had the honor of falling in love with the beautiful state of Oregon when the engine in our RV gave out while traversing the mountains of California. Instead of planting ourselves in a boring hotel for 2 months awaiting the repairs, we continued on our journey, exploring Oregon in our little yellow Pontiac G5. Continue reading... “For The Love Of Oregon Film!” 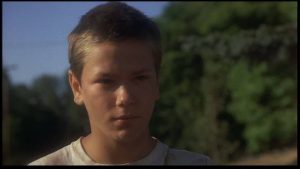 A fan of the movie “Stand By Me” shared this on my Stand By Me Day July 23rd Facebook page. I think you should read it and remember that not all movies are just entertainment. Look at what this movie has done for so many fans…

Having just passed the 30 year anniversary of the classic movie “Stand By Me”, I was scrolling through the popular “Stand By Me Day” Facebook page with all its marvelous photos of the filming locations in Brownsville, Oregon, where this year, the biggest celebration was held in honor of the movie’s anniversary. Continue reading... “What Chris Chambers Means To Me, by Leenie Gabe” 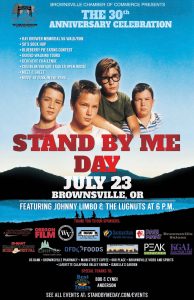 The small town of Brownsville, Oregon celebrated the classic movie Stand By Me on Saturday July 23, 2016. In 1985 Brownsville turned into a town named Castle Rock and was teaming with film crews, actors and all the excitement of the movie making process. Today, the movie is still regarded as a favorite and is listed as one of the top 250 American films of all time. Fans travel from all around the world during the year to see for themselves where this movie was filmed. Continue reading... “30th Anniversary of Stand By Me Was Huge Success”

25 years ago, on August 8th, a film shot in Oregon was released nationwide in the theatres. It hasn’t stopped playing since. It is currently #175 on IMDB’s top 250 list, above “Avatar” and “Gandhi”. It was nominated for an Academy Award for Best Adapted Screenplay from Stephen Kings’ novella “The Body”; the Japanese Academy Award for Best Foreign Language Film; and won the Jackie Coogan Youth Award for the cast of River Phoenix, Wil Wheaton, Jerry O’Connell and Corey Feldman. Continue reading... “25th Anniversary of Oregon’s Own “Stand by Me’”