I thought one could only make film in Hollywood. Then, I made a short in Portland and it changed my life.

Los Angeles was the place I flew down to for meetings between long walks on beaches that felt hotter than the surface of the sun. Everything about L.A. felt like the polar opposite of Portland, the place where I had lived and worked as a comic book artist for years, first for Dark Horse and then for Marvel & DC, all the while coming up with ideas for film and television, ideas that made me feel excited not just as a creator but as a viewer. Continue reading... “From Oregon to L.A. and back again | BLACKSTAR WARRIOR” 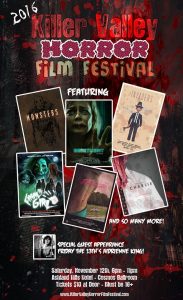 Returning to Ashland, OR for it’s 8th installment, the Killer Valley Horror Film Festival (KVHFF) is a celebration of independent horror and science fiction movies from around the globe. A one-night affair, geared to film-goers 18 years and older, the festival showcases genres that are arguably the most fun for independent filmmakers to create, and provides an atmosphere for horror fans to watch in a more social environment than a typical theater setting. Audiences often dress in costume, and the festival offers Special FX Makeup Booths in case viewers want to feel like a zombie for the night. Continue reading... “Horror Film Festival Haunts Southern Oregon On Nov. 12th”