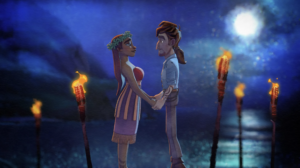 “The Moon Followed Me to Falmouth” will have its  US in-person premiere on Feb. 26th at the Oregon Short Film Festival at the Clinton Street Theater.

The musical short film was Executive Produced by Portland-based composer and filmmaker Kurt Rosenberg, based on his song of the same name. It was brought to life with stunning animation by Joël Gibbs of ARMADA studio.

This visually beautiful animated film is reminiscent of the old sea shanties found on the British Isles, a music genre that Kurt Rosenberg loves to listen to and compose. Continue reading... “Portland’s Kurt Rosenberg Brings “The Moon Followed Me to Falmouth” To Oregon Short Film Festival”

Seasoned photographer and musician, Jon Deshler has taken over the Mt Angel Theater & Studio. A unique 3000 sq ft space in a special town, built out by a novel local, his friend – Stu Rasmussen. Deshler once owned and worked out of what is now the Coopers Hall in SE Portland and has for a time been working just outside of the Portland metro area south of Oregon City in the beautiful countryside of the north Willamette Valley. Having collaborated with Rasmussen over the last twelve years on myriad projects, the two became friends and supporters of each others endeavors. Continue reading... “Mt Angel Theater Studio & TUNE TOURS”

Recently announced by the Hollywood Music in Media Awards that Chris Thomas, Bend composer, and Central Oregon Symphony  cellist – has won the Outstanding Original Score – Short Film award for the live-action short, “Imagine Symphony Live.”  The film is set in Oregon and was produced and directed by Evan Sigvaldsen.  The film depicts the story of a child who, while attending a live orchestra performance, is so inspired by the music that he begins to daydream he is outside exploring the majesty of the Oregon landscape – the magic of the music heightening his experience. Continue reading... “Bend Composer, Chris Thomas, Wins HMMA Award For Outstanding Original Score – Short Film Category”