AEPDX, 3DPDX and VFX/PDX are joining forces to bring you a huge double event for Design Week Portland 2016.

Alphabest is an invitational collaborative show where local individuals or teams of talented animators & video artists make a creation (15 – 60 seconds long) based on a word that begins with a randomly assigned letter from the alphabet. The 26 created pieces will be assembled for an amazing presentation.

Reel Review 2016 will be a showcase of the best reels of local talent in motion, 3d and vfx. 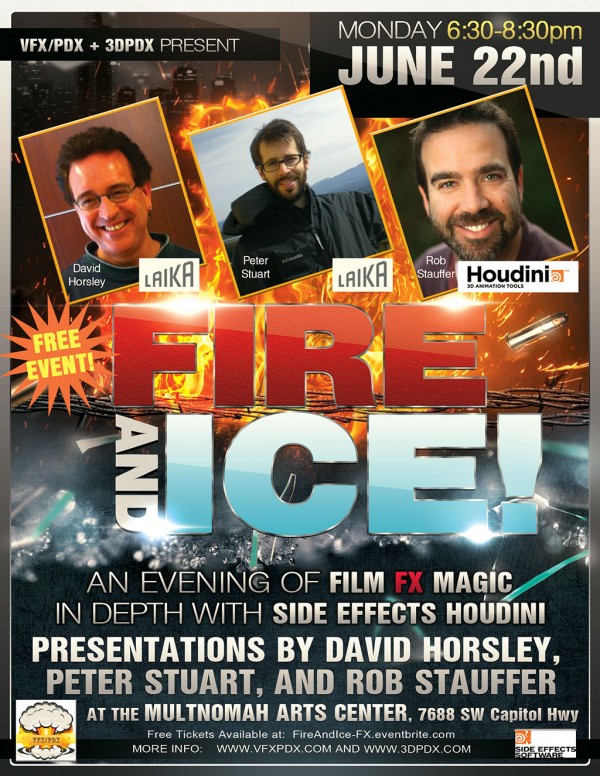 The role of “FX Artist” working on a film is a fun one indeed.  FX Artists are tasked with creating dynamics and particle animations that create flashy effects like explosions, psunami level tidal waves, smoke, buildings crumbling, and other such epic imagery that make summer blockbusters all the more fun.

We’ll have 3 such individuals presenting at the next VFX/PDX meeting, which will heavily feature their weapon of choice:  Side Effects Houdini.  Portland, it’s time for a night we’re calling FIRE & ICE! Continue reading... “Next VFX/PDX Meeting – LAIKA and SideFX Houdini! June 22” 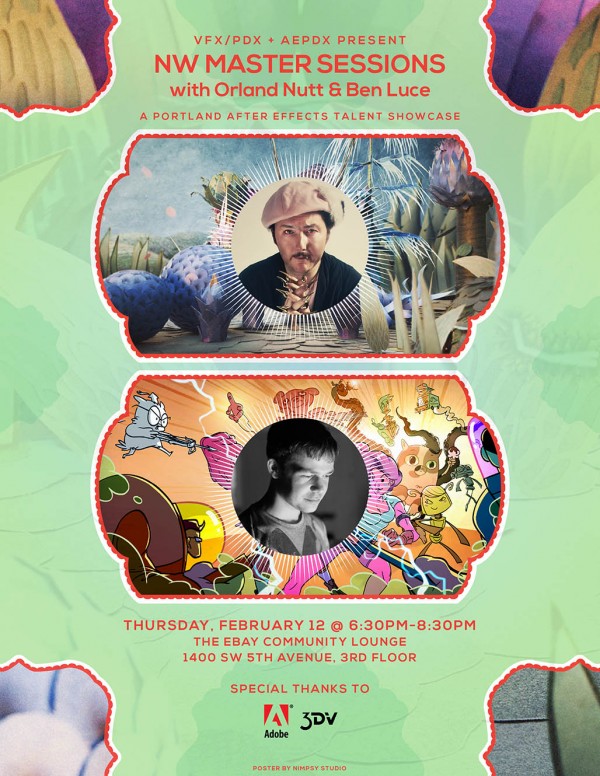 Join us for a screening of select works from the decade+ catalog of Orland Nutt, including his latest “Bear of Heaven,”  followed by in depth behind the scenes that showcase Orland’s mastery of Adobe After Effects that is regularly on display as one of the front line artists at Bent Image Lab.

Opening the show will be Ben Luce, an extremely talented illustrator and animator who’s art blurs the lines between traditional and digital.  Ben will be demo’ing his techniques with Photoshop and After Effects. Continue reading... “Next VFX/PDX Meeting – Feb 12th w/Orland Nutt & Ben Luce!” 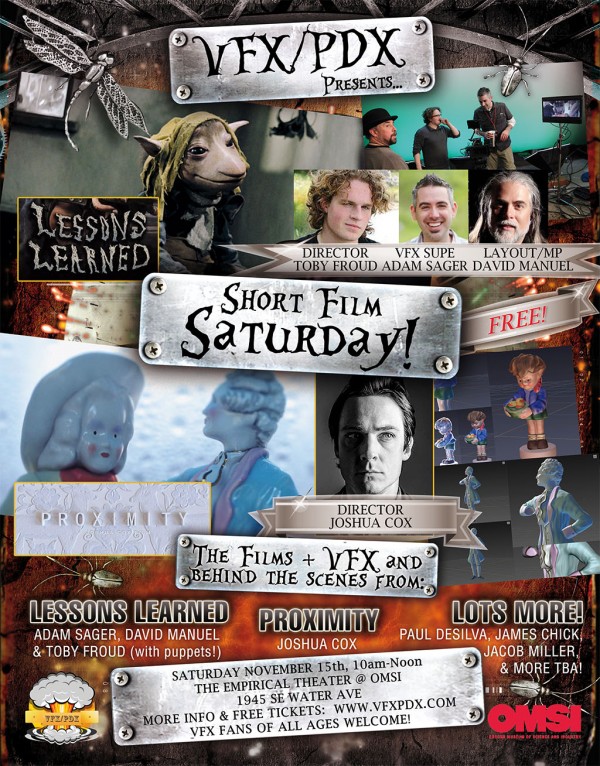 Join us for a night dedicated to all things imagination as Cooper Johnson & his crew at Cardboard Castle will guide us through inspiration laden breakdowns of their recent work.  Also on hand will be Damon Redmond (Art Director at SuperGenius by day/instructor at CCC by night) and DMC department Director Andy Mingo from Clackamas Community College, both strapped with a loaded Motion Capture setup, with intent to demo it!  There are some lively things happening down at CCC, which will be undeniably clear after seeing the tech in action. Continue reading... “VFX/PDX and OMSI Science Pub present: Cardboard Castle + Live MoCap with CCC, 8/19 @ Crystal Ballroom” 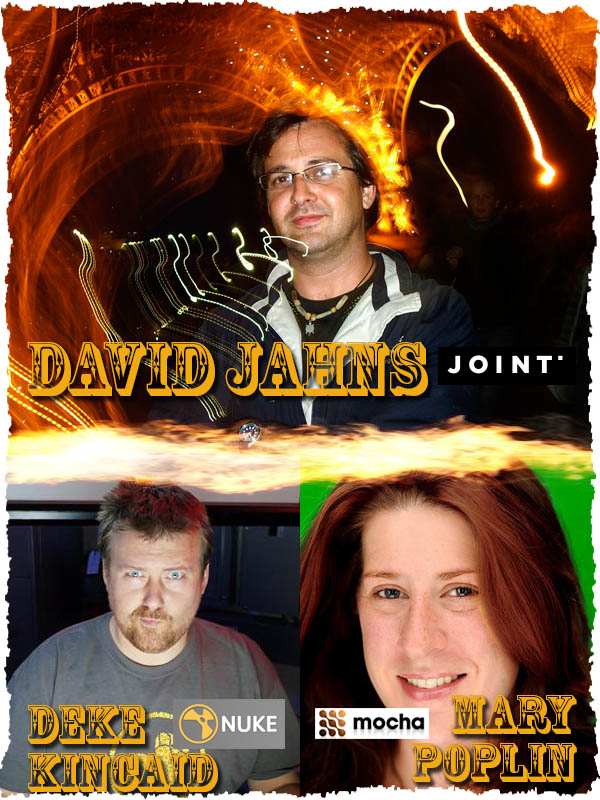 Heads up that VFX/PDX, the local visual effects artist user group, has a meeting on tap for today (April 17) featuring David Jahns of Joint Editorial, Wieden and Kennedy’s in-house post production facility.  He’ll be showing off the editing software Smoke from Autodesk and his workflow for the great work coming out of Joint.

Also we have Mary Poplin from Imagineer flying in to demo the popular tracking software Mocha, which won a Sci-Tech Oscar last year and is nothing short of amazing. Continue reading... “VFX/PDX User Group Meeting Today – W+K, Mocha & Nuke!” 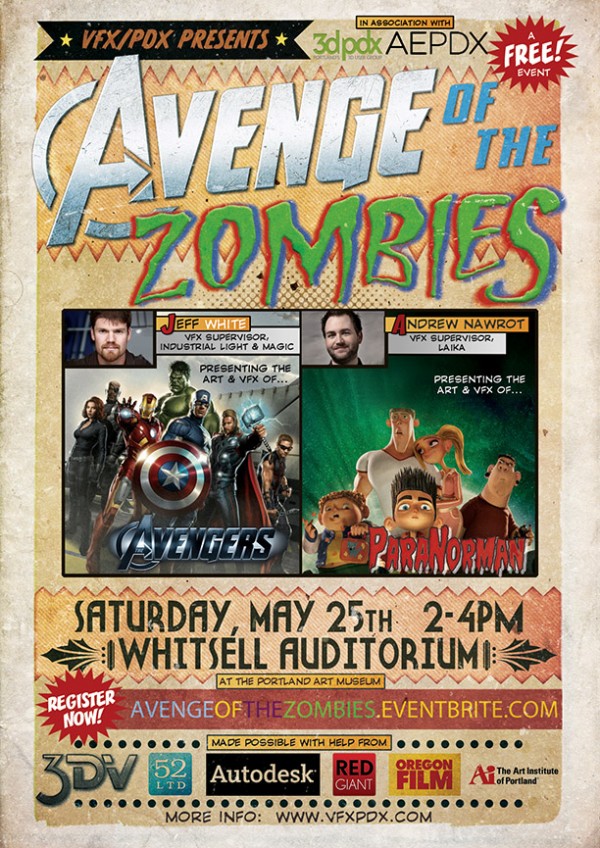 To all visual effects fans and film buffs – we’ve got a live one here!  Jeff White (Visual Effects Supervisor) will be coming up from ILM and showing off their Oscar nominated work on The Avengers.  These are behind the scenes that go deeper than you’ll ever see on any DVD extras, and you’ll see in depth how the VFX team swarms on raw footage and magically transforms it into the film you see on screen. Continue reading... “Next VFX/PDX Meeting – ILM & LAIKA! Sat., May 25th”

3DPDX, VFX/PDX and PAMUG present an evening with concept artist Scott Robertson.  Scott is renowned for his product design work and contribution to films such as Minority Report.  He’ll be coming up to show us his recent work and demo the power of The Foundry’s Modo and Mari 3D software.

Food + drink will be provided and a raffle with some great prizes is also on tap.  Come hungry!

It’s that time again.  The Portland area Visual Effects & Animation user group, VFX/PDX, has their winter meeting on tap, and it will surely heat up an otherwise chilly Monday night. 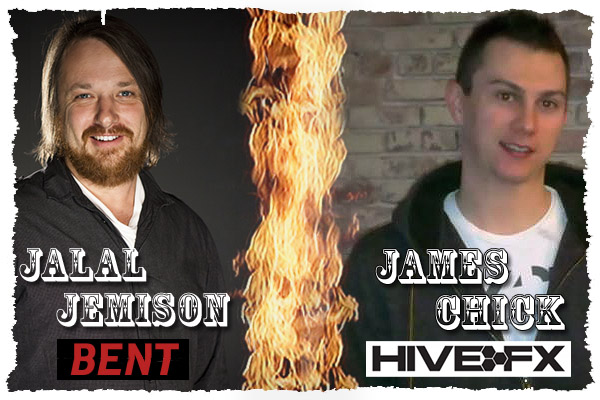 Lead Compositor James Chick of Hive-FX will be showing in-depth breakdowns of their work on the series Grimm, as well as other projects from a very hopping 2012.  James is a talented Compositor who’s weapon of choice is Adobe After Effects, and recently he’s been funneling his free time and filmmaking skills into an impressive run of short films, which should make his presentation one not to miss. Continue reading... “Next VFX/PDX Meeting – Monday February 11th”