This year marks the fifth season that Wheel of Fortune has featured a “Going Green” theme week. In past seasons, Pat and Vanna have offered viewers tips for going green and have shared updates about what Sony Pictures is doing to keep the studio lot environmentally-friendly.  As well as the kick off Going Green Week, the show is also featuring, Portland Week, College Week and the Great Outdoors.  See the schedule for air dates on KATU below:

We were there for the Going Green Week taping and the set looked amazing, complete with a digital waterfall and greenery -both live and re-useable manufactured greens. 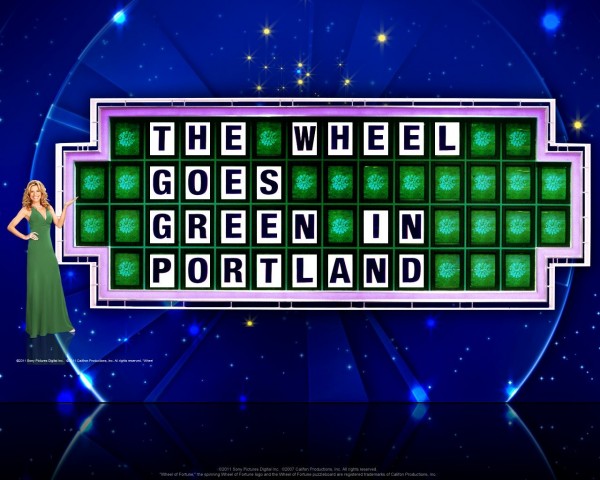 We have already blogged about the Wheel of Fortune shooting a week’s worth of shows this week end and early next in Portland for their up-coming “green week” but I also wanted to take the opportunity to give a shout out to Sony Pictures Entertainment and their sustainability efforts.

About two years ago I was contacted by Steve Denari from the local ABC afilliate KATU about the possibility of landing “Wheel of Fortune”.  We jumped at the chance to help with the effort and along with the help of Mayor Sam Adams’ team, it’s now a reality.  Actually the producers of “Wheel” came up here nearly a year ago to shoot all the on location bumpers for the 20 episodes and now they are about to set up shop at the Oregon Convention center. Continue reading... “Coming this month to Oregon – Wheel…Of…Fortune!”

Pipeworks Software, based out of Eugene, is at the heart of this constantly shifting field. Ever turned on an Xbox or Xbox 360? Continue reading... “Case Study: Pipeworks’ “Zumba Fitness” Tops Global Charts”