Tune in with the Oregon production community for OMPA’s Annual Showcase & Awards, live next Thursday, January 28 from 5-7pm.

This is a rare opportunity to hear from more than a dozen local industry leaders in one night!  Continue reading... “Come together with your community! 2021 OMPA Annual Showcase & Awards—Jan. 28” 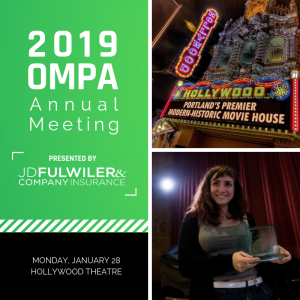 It’s time for another one of OMPA’s biggest annual events! Join us Monday, January 28, at the Hollywood Theatre for our Annual Meeting – presented by JD Fulwiler & Company Insurance. Members and non-members welcome. Admission includes catered buffet and one drink ticket. RSVP Now ►

Don’t let the name fool you – this event is more party than meeting. The evening will include awards presentations, screenings of OMPA member work, special announcements, networking and more. Food will be provided by the always-wonderful Mundo Catering. Continue reading... “You’re Invited: OMPA Annual Meeting At Hollywood Theatre”

In Oregon we are blessed to have people who know how to tell stories.  Storytelling has always been a part of Oregon’s DNA.  We have great novelists, great song-writers, and great filmmakers.  We also have great innovative storytellers.  One such group of innovative storytellers is Second Story Interactive Studios.  Founded in 1994 by Julie Beeler and Brad Johnson, Second Story is thought of as one of the leaders in the interactive industry, collecting over 400 awards and accolades.

Don’t forget to mark your calendars and come join us and Governor John Kitzhaber for the:

We will be honoring several people and organizations throughout the state who have played an important role this year in the industry’s success. We also have some exciting announcements to reveal at this event that will be worth celebrating the future of the industry. Continue reading... “Governor’s Office of Film & Television’s Annual Meeting”

You are Invited to Attend

The Governor’s Office of Film and Television