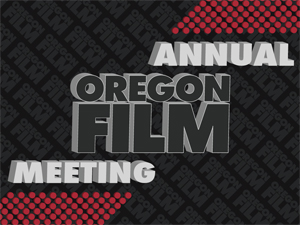 We’re getting lots of interest in the annual meeting and for good reason!  It’s going to be a great night!  You’re going to want to get there early.  Doors to the theater open at 5:30PM and as you are entering the theater, be sure to check out the awesome installation from Second Story Interactive Studios.  Second Story is this year’s recipient of our “Innovation In Media Arts Award” so we’re thrilled to have them show off their work.

This year the University of Oregon’s media team was able to record the annual meeting and now it’s available here.  If you have a Mac you’ll first need to download the flip for Mac Application which can be found here.  One quick note – we ran a 15 minute pre-show of clips prior to the meeting beginning and that is on the front end of the video.  If you’re interested in knowing what the clips are –

#6 – Behind the Scenes of “Grimm” Continue reading... “Recorded Webcast of Annual Meeting Available”

With our Annual Meeting a little over a week away, things are coming together and I know it’s going to be a great night!  As for the annual meeting here is the date and time:

There will be a statewide teleconference so if you live in or nearby Ashland, Bend, Eugene, or Portland, you can attend.  It’s open to the public.

In Portland we will be originating the teleconference from the newly remodeled Lincoln Hall at Portland State University.  Continue reading... “Oregon Film Annual Meeting – Things Shaping Up!”