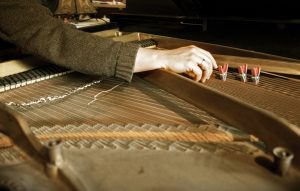 The Northwest Film Center is excited to be offering a Saturday workshop with local composer Mark Orton, who composed music for the films Nebraska and Boxtrolls, in addition to a new soundtrack for Buster Keaton’s The General and work on This American Life.

How to find, hire and work with a film composer, from the demo process to finished picture. The instructor’s musical palette and style will guide the discussion, along with real-life case studies from a variety of feature, documentary and fine art films. Emphasis is placed on developing strategies for successful communication between director and composer, the key to making beautiful music together.

Topics:
Anatomy of the film composing community (where and how to search for a composer)
Film score sources (original, licensed, public domain, live captured, sound design)
Typical contracts, budgets and timelines
Work that occurs before a composer is hired (the temp score, music demos)
After a composer is hired (the spotting session, the cue sheet, score workbooks)
Giving notes and feedback (glossary of film music terms for directors)
Final stages (the music mix, filing cue sheets)
How to license music for film (obtaining mechanical and sync rights)
Getting to know the film music team (music supervisors, music editors, copyists)

Filmmakers at all experience levels are welcome. Interaction with the instructor is highly encouraged.