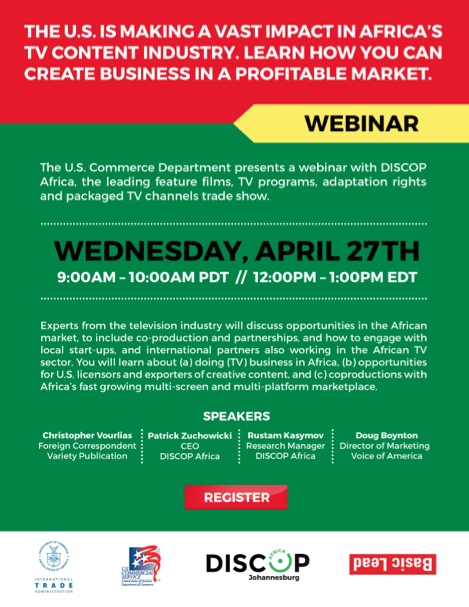 The U.S. is Making a Vast Impact in Africa’s TV Content Industry.
Learn How You Can Create Business in a Profitable Market.

Experts from the television industry will discuss opportunities in the African market, to include co-production and partnerships, and how to engage with local start-ups, and international partners also working in the African TV sector. You will learn about (a) doing (TV) business in Africa, (b) opportunities for U.S. licensors and exporters of creative content, and (c) co-productions with Africa’s fast growing multi-screen and multi-platform marketplace.

A total of 2,000+ participants from 90+ countries are expected to take part in DISCOP Africa Johannesburg.

Patrick Zuchowicki, CEO, DISCOP Africa
Paris-born Patrick Zuchowicki is the CEO of Basic Lead and the founder of the Discop Markets. Patrick guides the strategic vision, plans the day-to-day operational goals and objectives, and develops new events enabling the organization to advance and expand. Passionate about the industry his company services, Patrick has been instrumental for more then twenty-five years, in opening doors in new territories to producers and distributors. He enjoys living permanently in sunny Los Angeles, because it is the greatest place in the world if you love the entertainment industry.

Doug Boynton, Director of Marketing, Voice of America
Doug Boynton has more than 40 years of experience in media management – as a broadcast and programming executive and as a working journalist. He was named Director of Marketing for the International Broadcasting Bureau (IBB) in May of 2007. IBB’s Office of Marketing supervises more than 2500 affiliate relationships with broadcast, digital and mobile outlets worldwide – on behalf of Voice of America (VOA), Radio Free Europe/Radio Liberty (RFE/RL), Radio Free Asia (RFA), the Middle East Broadcasting Network (Alhurra Television and Radio SAWA) and the Office of Cuba Broadcasting (Radio/TV Marti). He and his family reside in Fairfax, Virginia.