This morning , Oregonian, Will Vinton passed away after a long battle with Multiple Myeloma.   Vinton was, and is, an inspiration to many of animators and filmmakers alike.  He started his career in filmmaking in the early 1970’s with Claymation projects such as, “Closed Mondays” for which he won the Best Animated Short Oscar in 1975.  Vinton went on to create Will Vinton Productions (later Will Vinton Studios) and created many more animated short films, PSA and television commercials, as well as special effects for film and television (he won an Emmy for this work on the television show, Moonlighting, in 1987.) Continue reading... “Iconic Oregon Animator & Filmmaker, Will Vinton, Dies Aged 70”

Celebrate the pioneer of Claymation and the film industry icon Will Vinton as he receives a lifetime achievement award. Special Q&A with Vinton on his career and impact on the industry.

Academy Award Winning Short, “Closed Mondays,” celebrating its 40th anniversary will be screened before the feature.

Bring your characters to life with guidance from the Claymation pioneer in this 13 session course. Registration is open now, class begins January 26th, no prior experience is necessary.

Looking for something different than claymation? The School of Film is also offering Computer Animation with Flash, give your two dimensional artwork movement and depth while learning Adobe Flash software. Continue reading... “School of Film Offers Claymation with Oscar-Winning Director”

Whether you’re aware of it or not, you know of Will Vinton. He’s the man who coined and, in 1978, registered the term “claymation” to describe his films’ use of stop-motion animated clay. He’s responsible for some of the most well-recognized ad spokesmen of the twentieth century in this style – the California Raisins and the Red and Yellow M&Ms. He’s won an Oscar and multiple Emmys; all while working from his home base in Portland, Oregon. Continue reading... “An Interview with Will Vinton” 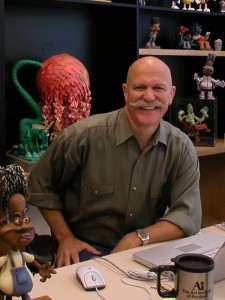 Oregon’s animation industry is as exciting as ever and the Oregon Animation blog is continuing to gear up with new posts and updates on cool projects throughout the state.

Be sure to check out the brand-new interview with Academy Award winner, Oregon native and claymation pioneer Will Vinton in particular. Vinton talks about his past projects, why he loves working in Portland, his views on shifting technology and the international animation industry. He even gives a tip to all the rising animators out there so read the entire interview here. Continue reading... “Interview with Will Vinton on the Oregon Animation Blog”