The City of Canby’s Eco Park was added to the Oregon Film Trail and commemorated with a community dedication. NBC’s “Grimm” was filmed in the city’s Eco Park in early 2014.  The public celebration was held on Friday, October 29th right in beautiful Eco Park. Canby City’s Economic Development Department assisted production crews to identify a location by providing access to the park and found parking to store trailers, equipment, and crew facilities.

As the Oregon Film Trail continues to grow, the sign marker in Canby recognizes the importance of “Grimm” as just one production among many that filmed there and in other locations around Clackamas County, and across the whole state.  “Partnering with the Oregon Film Trail is an exciting opportunity for Canby,” said Sarah Spoon, Canby City Councilor. “We have been developing the sense of place that makes Canby special. This partnership, plaque, and spot on the Oregon Film Trail map allow us to show the whole region how beautiful and unique our community truly is as we continue to establish and market our value as a destination worth visiting.” 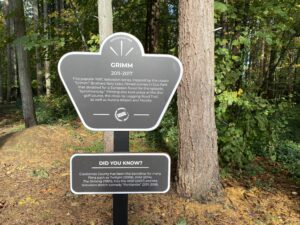 The collection of Oregon Film Trail markers aims to strengthen the correlation between the film and TV industries, economic development, tourism, and local interest alike.

Look for another marker on the Oregon Film Trail that celebrates “Grimm” in Pier Park, north Portland.

For more information about the Oregon Film Trail, visit https://www.historicoregonfilmtrail.com/.