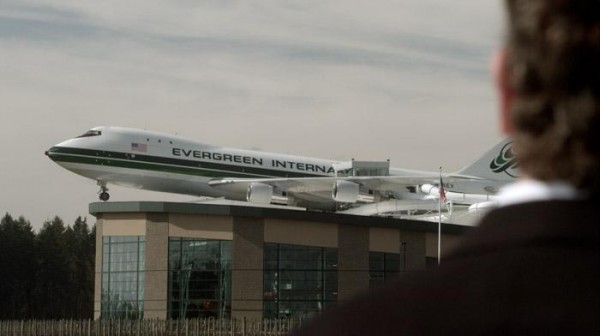 This past Wednesday I was kindly invited to attend a private sneak peak of the premiere episode of “Leverage” season 5 at the Evergreen Aviation Museum’s incredible digital theater.  In attendance was Executive Producer Dean Devlin and Co-Producer Jose Behar along with founder of Evergreen Aviation Dell Smith.  The screening was held at Evergreen because much of the first episode takes place at the museum.  The Leverage team pulls off a con to steal the legendary Howard Hughes aircraft The Spruce Goose which is housed at the Aviation Museum.  All in attendance had a great time and Dell Smith himself thanked Dean for the great exposure for the museum.

If you want a more complete rundown of the episode, click here for Kristi Turnquist’s blog post.  Of course as it has been written frequently, this year the team moves to Portland and immediately in the first episode Portland is on full display.  One business that should be really happy this year is the Bridgeport Brew Pub as in the episode Hardison buys the pub.  There were probably four different shots of the Pearl District brew pub’s exterior in the first episode alone!  Most have to pay for that kind of exposure but I’m told the show did this for free. 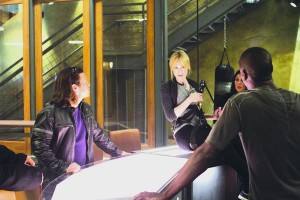 Local Production Designer Randall Groves designed a fantastic set this year for the Bridgeport Brewery.  He based it largely off the actual site but included a few extra elements to put his signature on the set.  You’ll see just how good our local art department, construction, and set dec crew is when you see this set.

So now we have three shows set in Portland with three distinct looks.  Having “Leverage”, “Grimm” and “Portlandia” all have their unique look is a huge asset for us when we pitch new projects.  Often producers and directors associate one look for a city/state, now we have proof of the region’s diversity.  It will be interesting to see what other new looks and locations end up in season 5 of “Leverage”.

One thought on “With Premiere of Season 5 of “Leverage” Stealing the Spruce Goose, Evergreen Aviation Museum Gets Nice Exposure”