The SourceOregon directory is a testament that Oregon is connected, professional, and statewide. If you have professional experience and would like to be on the list of qualified professionals who serve Oregon’s industry, you are invited to list. Publisher OMPA is committed to including every qualified professional crew member, vendor, agent, actor, production and post-production provider in the state. The more complete the directory, the better case that Oregon can make to be a fit for even more projects. Continue reading... “Producers Ask Oregon Crew and Vendors to List in 2015 Production Directory”

To help studios and producers stay on top of crew and resources and to promote Oregon’s unique production advantages, the trade group Oregon Media Production Association (OMPA) has released the 2014 SourceOregon, a directory of the professional crew, talent, vendors and support services that make up Oregon’s bustling industry. Industry parties in Portland, Eugene, and Ashland are scheduled in April to celebrate the directory’s launch. Continue reading... “SourceOregon Production Directory Released”

This Friday Nov 30 is the deadline to list in the 2013 print edition of SourceOregon, the industry directory of professional crew, talent, production and post-production companies, equipment vendors and support services in Oregon. It is a simple process: Click “Get Listed” at www.SourceOregon.com and follow the instructions. References or reputable IMDB credits are required.

SourceOregon is how Oregon’s commercial, film, TV and interactive media production industry stays connected and represents itself to the world. It is published in print and online and features a magazine dedicated to promoting Oregon’s industry, over 800 individuals and companies, with over 1,500 professional listings representing members of OMPA (the Oregon Media Production Association), IATSE, SAG/AFTRA, Teamsters, camera, directors and producers unions, and representation of crew and services organized around the state to serve production needs. Continue reading... “Print Deadline: Oregon’s Production Directory – SourceOregon” 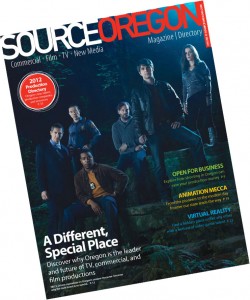 The long awaited 2012 version of the SourceOregon industry directory is here, and we want you to celebrate with us! Three SourceOregon Directory Release Parties are scheduled throughout the state:

There are 1,500 crew and professional services included in this year’s directory, reflecting Oregon’s growing resources to serve the commercial, film, television and interactive media production industry. Continue reading... “Join Us for a “SourceOregon Directory Release Party””