A short film by Jon Meyer will premier at Kelly’s Olympian Wednesday, September 26th at 8pm FREE. The premier will also include the brand new music video for HEY HEY HEY, the new single from THE QUICK AND EASY BOYS. Following the nights 20 minute program BRAIN CAPITOL will hit the stage for a live performance of fun Portland rock. See you there! Continue reading... “The Premier of THE HAPPY MACHINE”

I finally completed the process of uploading ALL the Free Box episodes to Vimeo presenting them in the highest quality available for the first time on the net. The Free Box is a web series I directed 27 episodes for 3 years in Portland producing it with borrowed equipment and foodstamps. The original Portlandia! Check it out again or for the first time. -Jon
https://vimeo.com/user4781378

THE FREE BOX#16 “Vomit Milk” from The Free Box on Vimeo. Continue reading... “The Free Box gets a facelift.”

Shot in one awesome in Portland, the new single by Portland’s “Worth” from his debut solo release “Six Foot Soul” due in August. Worth has been rocking the Portland scene for the last five years as the front man for NIAYH (Now Is All You Have) and is currently touring Europe to promote his new album. “Caught Up” is the first single and got a lot of people dancing during the Last Thursday street fest, check it out! Continue reading... “A music video for Portland’s “Worth” shot at Last Thursday” 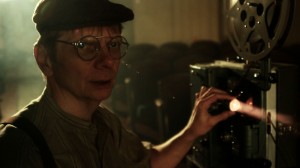 “C’mon Doll” by Seattle’s My Goodness was shot in the Historic Bob White Theater and Academy Theater in SE Portland with the band footage shot in a barn in Scappoose. This is the Second music video in a month by Portland’s Day 1000 Films with a third to be released in May as well as two short films, “The Last 8” and “The Happy Machine”. The video was made to promote the new single in support of the band’s May tour through Europe opening for “We Are Augustines”. Continue reading... “New Music Video by Portland’s Day 1000 Films Premiers on Britain’s NME.com”