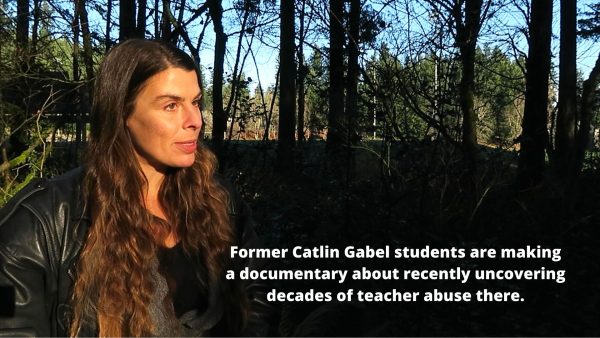 Learn No Evil is an upcoming documentary about a #MeToo reckoning for one of Oregon’s most prestigious schools. In this explosive, and still-unfolding story, former students uncover decades of teacher abuse at Catlin Gabel.

Since my initial posts about the inappropriate conduct I experienced at Catlin Gabel, there’s been a perpetual flow of victims coming forward. The severity of offense ranges from disturbing and gross, to shocking and horrific. There was physical abuse, emotional abuse, molestation, rape and even incest – all at the hands of TEACHERS, some of whom were seen (by many) as God-like at the school. The discoveries have sent waves of grief and heartbreak throughout the network of students, parents, alums, and staff at Catlin Gabel. However, along with the darkness, there comes a light.

The public release of Catlin’s year-long internal investigation was a watershed moment. Countless victims who’ve been keeping painful secrets, for fear of shame, exile, or retaliation, are learning that they are not alone. One person said, for the first time, she no longer has self-doubt, what she experienced was real, and the violations were indeed, major violations. Another victim, a Catlin Gabel lifer, sent me this message:

People are re-connecting with old classmates, sharing love and support. We are having meetings and building a plan of action for our own healing, as well as demands for the school. The first gathering was put on by Catlin Gabel administrators, on campus, with very short notice. Not to mention, it was during the holidays. Despite all that, a multi-generational crowd of about 75 people attended. We took turns sharing personal stories of the various forms of abuse we endured there. There was a box of tissue on every table and not a dry eye in the house.

That’s when it hit me, what MY next step(s) should be…

Given that I am one of the folks who sparked this firestorm, and I happen to be a gonzo journalist, I am determined to build something positive from the ash. Therefore, I am producing a documentary about the cult-like “community” that insulated and covered-up what has turned out to be decades of abuse at Catlin Gabel. I have a growing list of subjects who wish to share their stories. This is an opportunity to shine light on a deep trove of formerly unspeakable secrets, while also addressing the wider epidemics of Rape Culture and Toxic Masculinity. It astounds me to witness new pages turning in so many chapters we thought were over, long ago.

Unlike my usual Audreality Productions content (where it costs nothing but my own precious time), right now the goal is to raise enough funds to make a “real” feature length film. A professional documentary costs one-to-two thousand dollars per minute to produce. Therefore, we are trying to raise at least $100k. This will cover a small crew and an animator, to help illustrate stories for those who wish to remain anonymous.