“The Phone Dead” was featured in the sixth edition of the wild, Japanese anthology TETSUDON and World Premiered at the Yubari International Fantastic Film Festival.  It also played at the Yokkaichi Film Festival and as the closing film for the Asian Summer Film Festival in Spain before touring Japanese theaters.

Other films from local filmmaker Josh Hoffman include the plastic surgery horror feature UNDER THE KNIFE and EYETANIC, a new short film that completed filming this fall about a giant eyeball attacking a city.  Both are scheduled for 2020 releases.

You can WATCH – THE PHONE DEAD – RIGHT NOW on AMAZON PRIME or TROMA NOW! 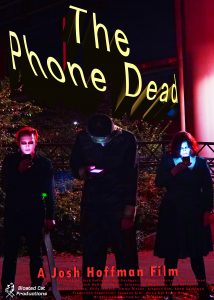