Let’s just say that we’re big fans of both OPB and OHS, especially the original programming of the former and the film and media archives that are housed by the latter. And we’re always excited to watch the content that both of these great #OregonMade organizations create. And, yes, we’ve binged on Netflix’s Wild Wild Country but the roots of that incredible documentary are grown from several deep journalistic roots here in the state that should always be recognized.

The first is the incredible 20 part story from Les Zaitz in The Oregonian. The second is the other great finally-told-Oregon-story from Maclain and Chapman Way The Battered Bastards of Baseball (also available on Netflix) which, the story goes, brought them deep into that glorious film and media archive at OHS mentioned above (and, some say, led directly to their interest in the story of the Rajneesh after viewing much of the local footage stored there, but that’s a story for another time). And the third journalistic pillar that Wild Wild Country was built upon comes from OPB’s terrific series Oregon Experience.

Raider/Contributor Phil Oppenheim takes us into this wild, wild country that was Co-produced by OPB and OHS with Co-producers and writers Eric Cain and Nadine Jelsing. 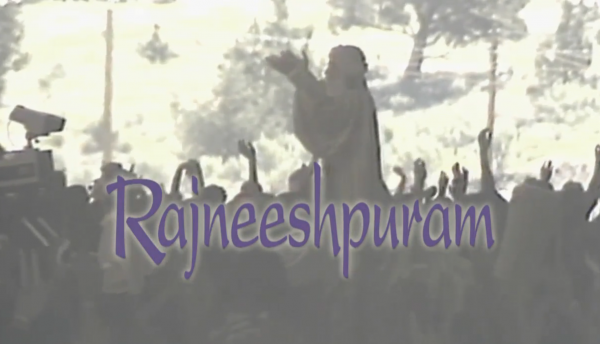 From the looks of last weekend’s box office, many of The Confluence’s readers were staging a pop-culture Raid of their own, proving their geek cred by identifying the onslaught of avatars in Steven Spielberg’s interpretation of Ernest Cline’s novel Ready Player One (nerd note: while the movie wasn’t #OregonMade, having been shot in the UK, the novel is at least partly #OregonSet, with the character Og Morrow living in Oregon; similarly, Cline’s second novel, Armada, starts off in the character’s hometown of Beaverton!).  But for the rest of us, we found that a more engrossing epic was streaming on Netflix: the six-part miniseries Wild Wild Country, a fascinating and immersive documentary about the followers of guru Bhagwan Shree Rajneesh and their (mis)adventures in trying to create an oasis for themselves in Central Oregon.

The Netflix series, directed by brothers Maclain and Chapman Way and executive produced by mumblecore mainstay brothers Mark and Jay Duplass, leverages its bingeability into enveloping us with its take on the notorious story about the mysterious guru, his inner circle, the thousands of red-and-orange-wearing true-believers who followed them to their new oasis, and their rural neighbors, who found themselves nearly overrun by a religious sect whose practices and behavior — yoga, meditation, primal therapy, free love, automatic weapons stockpiling, Rolls Royce acquisition, and the occasional act of bioterrorism and attempted assassination — were at odds with the quiet life the retirees in Antelope, Oregon had imagined for themselves.

The Ways weave archival footage with fascinating interviews with many of the incident’s pivotal players, from the smirkingly condescending villainess Ma Anand Sheela (Bhagwan’s closest confidant, and the ringleader of most of the criminal activity—at least according to the Bhagwan’s accusations) to the (still) true-believing attorney Swami Prem Niren (the former Philip Toelkes) to the weak-willed failed assassin Ma Shanti B (author of the autobiographical Breaking the Spell, about her journey away from Rajneeshism) to the first-person accounts of several Antelopians, and many more.

Wild Wild Country tells its story with these gripping first-person accounts, creating a Rajneeshee Rasomon: we’re convinced that most of the interviewees are telling some version of their truth, making it difficult — and mystifying — to piece together our own version of what really happened.

It’s terrific, and if you’ll want to talk about it with everyone you meet (and especially anyone who lived in Oregon during the early and mid ‘80s, during the height of Rajneeshmania).  And you’ll probably want to learn more about this odd historical moment too.

Fortunately for us, there’s a fantastic documentary that will slake your intellectual thirst, and fill in some of the gaps left behind by Wild Wild Country.  In 2012, Oregon Public Broadcasting and the Oregon Historical Society collaborated on “Rajneeshpuram,” a fascinating hour-long study of the Bhagwan, his followers, and their tumultuous tenure within the state.

“Rajneeshpuram”’s approach to the subject hews closer to the shape of a traditional documentary, fitting snugly within the format of its The Oregon Experience series framework.  Writer-producers Eric Cain (who helped launch The Oregon Experience in 2006) and Nadine Jelsing (the current producer of the series) provide a clear narrative arc and authorial perspective throughout the tale, emphasized by the familiar and comforting (and appropriately skeptical-sounding) guiding voice of Peabody-winner Scott Simon (host of OPB’s Weekend Edition Saturday).  The linear trajectory of “Rajneeshpuram” helps frame the troubling, bizarre proceedings in some kind of logical sequence, giving us some kind of reasonable yardstick by which to measure the illogic and unreason of the tale as it unfolds.  To my mind, nothing “explains” why the Bhagwan’s devotees would give up all of their wealth to add to his fleet of more than 90 Rolls Royces, for one example, but the documentary does its best to answer such questions (and many others).

Like the Netflix series, “Rajneeshpuram” deploys documentary footage and early ‘80s ephemera to re-create the historical moment; if you watch Wild Wild Country first, you’ll recognize many of these materials from the OPB account, although “Rajneeshpuram” seems to contain even more vintage visuals within its shorter running time (sources include The Oregonian, the still-active Rajneeshee organization Osho International, the compoound’s own The Rajneesh Times, KGW, KPTV, KOIN, and many others).  Also like Wild Wild Country, the earlier film uses interviews to weave together its perspective on this uniquely Oregonian Oregon Experience; armchair enthusiasts of the incident will appreciate seeing a collection of some different and additional interviewees, though, rounding out a more complete (or at least more nuanced) version of events.  Testimonials from Land Use Attorney Edward Sullivan, Former Secretary of State Norma Paulus, several Antelope citizens, and current true-believer followers (or “sannyasins”) like Swami Anand Svadesh and Devanda Day, touch help us puzzle through the pieces of the story — with Sheela remaining the chief villain, and Bhagwan himself still hovering between tragic negligence and fiendish complicity.

“Rajneeshpuram” also digs further into some specific topic areas to which Wild Wild Country gives less attention, particularly in terms of the particulars of the land-use controversy at the heart of the Antelope-Rajneeshpuram conflict, and the shadier elements of the religious retreat’s finances (both of which are more interesting than you’d guess).

Who knew that the leadership selected cute young women — self-dubbed “The Twinkies,” apparently — to help guide journalists through the site, so as to provide a more pleasant (and anodyne) tour for prying journalist’s eyes?  Tell me more!  The documentary’s brief exploration of the positive impact the Rajneeshees had on the local Oregon economy, several of whose businesses welcomed the sect’s business with open cash registers, is totally compelling, too.  And while the documentary approach provides less of a personality-driven or impressionistic approach of the Netflix series, you’ll find that there is still plenty of room for more post-screening questions and exploration.

What exactly was it about the tenets of Rajneeshism that attracted so many smart, affluent people to donate all of their assets to this silent guru?  Was it simply his charisma, or the charisma of his lieutenants (and especially the amoral Sheela)?  Can we dig more deeply into the roots of the philosophy behind the cult?  (Your humble Raider has been digging through the works of Gurdjeff to look for answers, for one thread to explore)  And what about the Rajneesh Hotel and Zorba the Buddha Restaurant in Portland?  Both documentaries leave us with the impression that the Rajneeshees had armed to the teeth after their Portland business/recruitment center had been bombed in 1983, suggesting that it was the work of an angry Oregonian; I wanted to hear more about the actual crime, the criminal who set the bomb (an Islamist from California, who was also a suspect in two Seattle bombings), and the terrorist organization behind the attack (Jamaat ul-Fuqraa’).

While it’s true that “Rajneeshpuram” leaves many, many questions for the obsessive detective to continue pursuing and researching, one thing is inarguably true: this documentary is outstanding.  If you were a mad-bingeing Wild Wild Country nut, it’s an absolutely indispensable addition to your fandom.  If you’ve been curious about this whole sordid episode of Oregon’s history but didn’t know where to start your investigation, you’ve found your first step.

Watch: “Ashram in Poona: The Bhagwan’s Experiment” is the documentary that shocked Oregonians about some of the Rajneeshes’ practices — many of which struck Western viewers as violent, sexual, and extreme — in India.  The notorious film, directed by the German filmmaker Wolfgang Dobrowolny in 1979, is available to watch in its entirety at Dotsub.  Viewer discretion is absolutely advised!

Visit: The former Rajneeshpuram is now the site of the Washington Family Ranch, the centerpiece of which is the YoungLife Camp, a Christian kids’ retreat based on “a few simple ideas about sharing the truth of God’s love with adolescents.”  Their website includes an interesting take on the history of the Big Muddy Ranch.

You can also visit the town of Antelope (formerly Rajneesh).  The Antelope Cafe (formerly Zorba the Buddha Restaurant) looks pretty closed, though.  I guess you could always book a flight to Osho International Meditation Resort in Pune, India to check out the grub at the new Zorba the Buddha, but that’s further down the Bhagwan rabbit hole than I’m ready to plunge.

Listen: If you’re the sort of person who occasionally likes to groove on the esoteric sounds of fringey cults and their fellow travelers — musical acts on the spectrum from Ya Ho Wha 13 to Bobby Beausoleil to Goat to The Children’s Scientology Pageant to The Polyphonic Spree, say — you’re going to love this: you can download hours of heartfelt Rajneeshee folk songs from the Sannyasin Wiki Page.  No donations necessary!

I’m going to bet that there are more than a few Confluence readers who have their own suggestions as to where curious viewers can turn for more to read, watch, and experience.  Feel free to add your ideas for more exploration in the comments!