Oregon doubles for Alaska in this week’s RotLA edition and it brings some (early) Batman-esque Romp! Danger! and Romance! to the fore in the process. Yes, Adam West is this week’s featured artist in a Deschutes National Forest set feature which predates Mr. West’s glorious days as the first caped crusader to appear on our screens and sends him into the woods to find unexpected love with a Nature Child and danger from rogue hunters in the form of Petticoat Junction’s Lori Sanders and Theo Marcuse, respectively. Pull on your stretchy pants and fur lined, off-the-shoulder one-piece and settle in for a Tempest in the Wilderness tale: 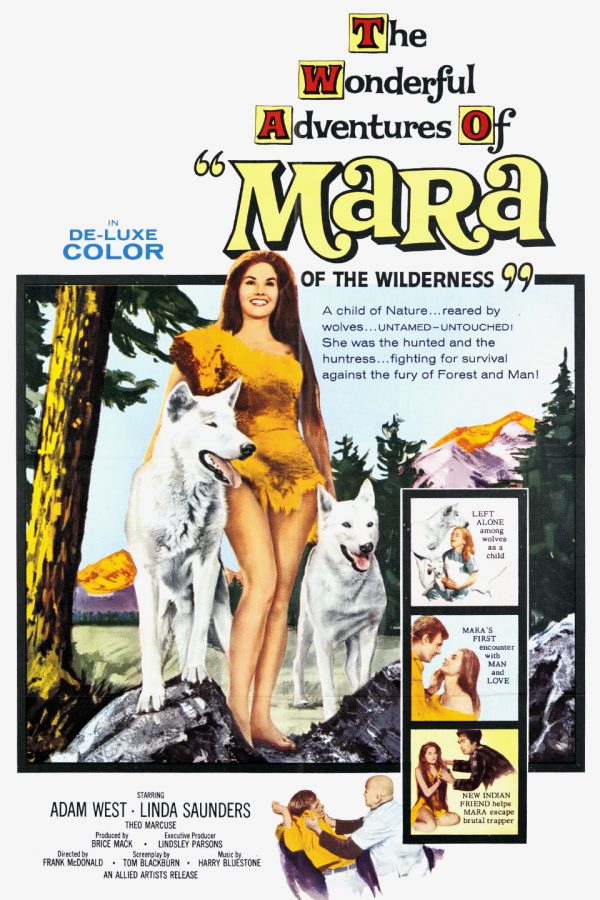 Mara of the Wilderness is the kind of movie I’ve had on a back-burner of obsessive movie consumption for a long time; it’s the kind of “family entertainment” that used to run a thousand times on Saturday mornings on UHF TV stations and cable networks as filler programming, and sounded as though it had the kind of goofball charms that I relish in a certain kind of time-waster film-watching.

The cast is intriguing, for starters.  It’s got history’s best Batman (the only Batman, in my opinion), Adam West, in a leading role the year before he became TV’s caped crusader.  His co-star and romantic interest (spoiler, I guess, but seriously—figure it out from the poster, people) is Lori Saunders, best known to classic Nick-at-Nite viewers as bubbly Bobbie Jo in Petticoat Junction and to horror fans as a reincarnated witch in the 1966 beatnik cult classic Blood Bath, directed by an incredible tag-team of trash films, Stephanie Rothman and Jack Hill.  The villain is Theo Marcuse, who specialized in playing beady-eyed bald baddies in countless TV series, including The Outer Limits, The Wild Wild West, Star Trek, The Monkees, The Man From UNCLE—and, of course, Batman.  And he steals MOTW (without resorting to wearing fur BVDs).

There’s a lot of talent on the other side of the camera too.  MOTW turned out to be director Frank McDonald’s last film; he’d been cranking out comedies and oaters since the ‘30s, including a passel of Roy Rogers and Gene Autry pictures.  The producer, Brice Mack, was no stranger to kid pix, having worked as a background artist for Disney on Fantasia (1940) and Song of the South (1946) among many others.  Intriguingly for readers of this blog (or maybe just to the writer of this column), the Executive Producer was Lindsley Parsons—the same guy who produced the gritty and decidedly kid-unfriendly Oregon noir (and Raider favorite) Portland Expose.

Of course the biggest talent in MOTW is its setting—the spectacular Deschutes National Forest (here subbing for the wilds of Alaska).  Most of the action of the film is set against the backdrop of the big sky, wilderness areas, and the distant Mount Bachelor; it often seems as though the characters are running in circles, though, in a very limited area, and you may well get the feeling that you’ve only glimpsed at the splendor of the region rather than have immersed yourself in it.  The good news, of course, is that it’s easy for Oregonians to visit on our own.

The plot of MOTW is the ol’ tried-and-true Boy-Meets-Girl (Raised by Wolves) Story.  Ken Williams (West) is studying for a doctorate in Anthropology, but is temping for the summer as a volunteer with “Juneau’s” Most Dangerous High Country Patrol—but what he really wants to do is to head out to the wild to see White Wolves in their native habitat and social groups.  Mara Wade (Saunders) starts off the movie seeing her anthropologist parents get mauled by a bear; she’s adopted by a pack of wolves and (in a dozen-year jump) becomes a comely Wild Girl teenager, wearing a fur one-piece swimsuit and howling with the rest of her family.  While their meeting might not be love at first sight exactly, you don’t need to be working on a doctorate in Anthro to hypothesize about what happens When Mara Meets Ken.

There’s something for everyone in MOTW, one could imagine the cigar-chomping executives at low-budget B-movie factory Allied Artists bragging about the movie—sure, it’s a family adventure with lovely scenery to keep the kiddies happy (and the film ran as daytime matinees in theaters accompanied with cartoons for years after its release), but it’s also got plenty of stuff for Mom and Dad too.  There’s—

Sex! The cheesecake factor is very high, with Mara running around in her natural state (or as close as censors might allow, Sheena-of-the-Jungle style) through the whole movie.  Dad audiences were also treated to Mara’s nude (obscured) baths in the river (she takes two of them — I guess cleanliness must be close to wolfiness too) and the occasionally kinky wrestling match with Ken.  Moms got their slice of beefcake too, as the Oregon wilderness (uh, “Alaska”) warms up enough to allow Adam West to go shirtless for a while as well.

Villainy!  The evil Jarnagan heads to the wilderness to bag as many wolves as he can, but he’s also interested in the “native superstition” (yep, he’s a racist too) about a White Ghost; turns out he’s a “curiosity hunter” whose business card explains that he captures and exhibits “Wild Animals, Curiosities, Freaks From All Parts of the World.”  Think he’d be interested in a hot Nature Girl?  He drools over the prospect, and also commits one heinous act after another: he kicks his Native American guide whom he insultingly names “Friday” (and later attempts to kill for unclear reasons), he taunts caged animals for the fun of it, he slaps Mara and leaves Ken stuck in a bear trap to die, massacres wolves from a sniper’s nest (a lawman later looks at the mass of wolves’ bodies and compares it to “Custer’s Last Stand”).  And he’s even a litterbug.  Marcuse relishes every nasty moment of his performance, and he’s easily the best thing in the movie (be prepared to throw popcorn at the screen and snicker at his comeuppance at the end).

Action!  There are fist-fights, bear fights, gun fights, and co-ed wrestling matches from one end of MOTW to the other.  The strangest may be the one in which Jarnagan gets Ken to accidentally set off a couple of bear traps, pinning both his shoulder and his leg to the ground.  Jarnagan leaves Ken to the vultures who noisily circle around him, looking forward to his being out of the way so that he can capture Mara for himself.  Jarnagan laughs to his Native American guide (maybe he kicks him again for fun too; I don’t remember exactly), and leaves Ken to his fate.  Will our intrepid Anthropologist escape the sharp talons of the hungry birds of prey?  Will our plucky professor instead be devoured by a bloodthirsty brown bear?   Or will our willowy Wolf Girl save him from the ferocious and furry fauna?  Stay tuned tomorrow: same Wolf-Time, same Wolf-Channel!  (and yeah, Mara saves him, after grappling with the stranger for a few minutes first)

Romance!  Ken and Mara exchange all of about ten words in the movie — exclusively of the “Me, Anthropologist; You, Girl” variety — but it seems enough to do the trick.  They succumb to their animal chemistry in the last minutes of the movie, with him kissing her first, and she planting a bigger smooch on him in return.  It’s a pandering moment intended to satisfy Moms and daughters, but it also completes the larger arch of the film: in broad strokes, MOTW is a retelling of Shakespeare’s The Tempest, with Mara as the innocent Miranda, Ken as an honest and heroic Ferdinand, Jernigan as the monstrous Caliban, Friday as Ariel, and the Deschutes National Forest as Prospero’s Island.

Or maybe it’s just about a cute girl in a fuzzy bathing suit.  Grab a bowl of Cap’n Crunch and a Hi-C juice box on some rainy Saturday morning and judge for yourself.

Watch: Mara of the Wilderness is a little tricky to find (not as hard as Bigfoot, maybe, but close).   You can purchase a VHS (!) copy from Amazon with hilariously bad and sexploitative box cover art (!!) for $179 (!!!) — or if you’re crafty, you might be able to find one kicking around streaming (quasi-legally) online.  Happy Hunting!

Visit: This is a beautiful time of year to visit the Deschutes National Forest.  Follow the Forest Service’s Twitter feed for updates and information about some of the winter’s most spectacular highlights. 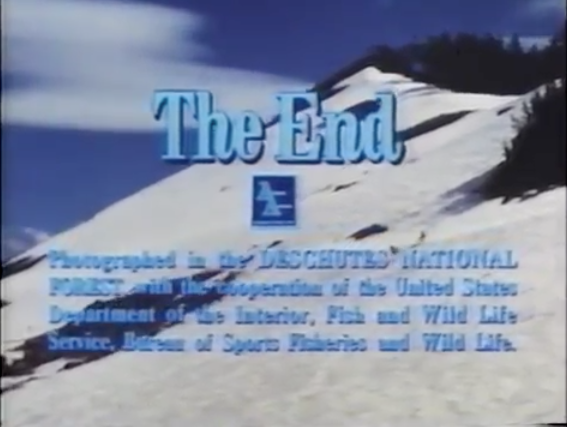