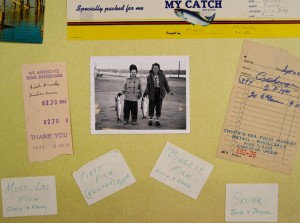 After great screenings at the Rotterdam International Film Festival and the Museum of Modern Art, Matt McCormick’s documentary film “The Great Northwest” is being screened right here in the real life Great Northwest.

The film will screen on May 2-3 in Portland at the Northwest Film Center.

The Great Northwest is an experimental documentary based on the re-creation of a 3,200 mile road-trip made in 1958 by four Seattle women who thoroughly documented their journey in an elaborate scrapbook of photos, postcards, and brochures.   Fifty years later, Portland artist and filmmaker Matt McCormick found that scrapbook in a thrift store, and in 2010 set out on the road, following their route as precisely as possible and searching out every stop in which the ladies had documented.  Patiently shot with an observational and voyeuristic approach, The Great Northwest is a lyrical time-capsule that explores how the landscape and road-side culture of the Pacific Northwest has changed over the past 50 years.

more information about the project, as well as a short clip can be found at:
http://www.rodeofilmco.com/2011/the-great-northwest-2/