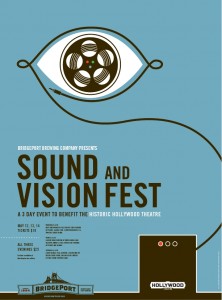 The festival was created to showcase new or existing collaborations between musicians and filmmakers, exploring how the moving image informs musical performance and vice versa. Each night of the festival will be curated by a different local artist and will feature a mixture of film screenings and live music from favorite local bands. Evening curators include:

• May 12: Award winning filmmaker, Matt McCormick (“Some Days are Better than Others”, “TheSubconscious Art of Graffiti Removal”) will curate the evening. Matt is also known in music circles for his work directing videos for The Shins, Sleater- Kinney, and YACHT and will collaborate with electronic musician Eluvium on a new film project to be screened on Thursday.  Goodnight Billygoat will close the evening.

• May 14: Lance Bangs will be screening a work in progress of his own to be announced, as well as “Animated Conversation with Noam Chomsky” (work in progress) directed by Michel Gondry (30 minutes), and “Mourir Auprès de Toi” (To Die by Your Side) directed by Spike Jonze & Simon Cahn (6 minutes).  A special surprise guest band will close out the night.

Tickets are now on sale and please follow the Hollywood Theatre on Facebook for all event updates.