Attending our Annual Meeting was Governor Kulongoski, members of the Governor’s Office of Film & Television Board, as well nominees for the annual awards and a large audience of industry professionals at the newly rennovated Lincoln Performance Hall at PSU on Friday evening.   PSU‘s technical team made it possible to catch up on industry happenings in Ashland, Bend and Eugene via  live broadcast by teleconference bridge.

At the end of the meeting representatives from Oregon’s Film and Video Industry gave a heartfelt and thankful presentation to Governor Kulongoski.  In his eight years as Governor, the film and video industry has seen dramatic growth and as a result thousands of Oregonians have been employed and hundreds of small businesses have been positively impacted by the projects produced throughout the state. 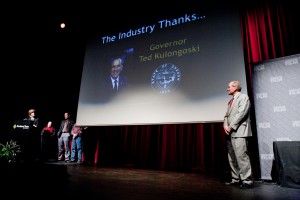