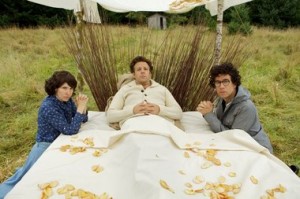 Today the Academy of Television Arts and Sciences announced that Amanda Needham and Niki Dimitras from “Portlandia” won an Emmy for best Costumes in a Variety or Music Program.  We picked up the story from Kristi Turnquist’s post today in the Oregonian.  Amanda and Niki won the Emmy for their costume design on the episode titled “Farm” which I believe was the premiere episode of the first season (you know the one with Colin the chicken).  Congratulations to Amanda and Niki and the entire cast and crew of “Portlandia”.  Continue reading... ““Portlandia” wins an Emmy for Costumes”