“SHIVER” is now set for a one week run at the Living Room Theatre in Portland, OR commencing on  September 20th. There will be a Special Event Premiere of the film at the theatre on September 19th.

Check out the trailer above. Continue reading... ““SHIVER” NOW SET FOR PORTLAND PREMIERE FOR SEPTEMBER 20th” 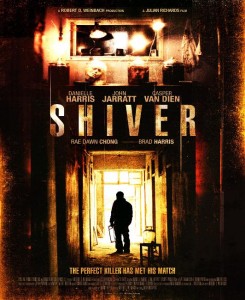 SHIVER, produced by Bandersnatch FilmCo in association with Cyclone Productions, Inc. on location in Portland, Or will have its South America Premiere at the 2012 Fantaspoa International Film Festival in Porto Alegre, Brasil.

CELL COUNT, another Portland production, produced under the state incentive program has also been selected as the closing night film of the Fantaspoa Film Fest. Continue reading... ““Shiver”, Another Oregon Film Production To Premiere at FANTASPOA Film Festival”