It is a forgotten piece of film history for all but the staunchest of aficionados, and its box office draw was almost nonexistent; yet a little-known feature film in the last thralls of the silent film era stands as a remarkable footnote in history as the first feature-length student film ever made – completed by University of Oregon students.

Known originally simply as The Campus Movie and later Green before settling on its final title Ed’s Coed, the 1929 film project was conceived by a trio of University of Oregon students. James Raley Jr.’s best friend, Carvel Nelson, had worked on the set of the 1928 film City Girl in Pendleton that summer, and while visiting his friend Raley had access to the set, inspiring dreams of making a film of their own. Enlisting the help of fellow student Ron Hubbs, the students envisioned a film that told the college experience. Emboldened by their on-set experience, the students sent repeated telegrams to iconic film director Cecil B. DeMille asking for guidance.

Meanwhile, an out-of-work cameraman, James McBride, had moved back home to the Pacific Northwest from Hollywood for medical reasons after working on numerous films, including four with DeMille; Feet of Clay (1924), The Volga Boatman (1926), King of Kings (1927), and The Godless Girl (1929). McBride reached out to DeMille asking if he knew of any work in the area, and DeMille responded with a recommendation to Hubbs and Raley to hire McBride to create their film concept.

With McBride on board and the eager students enlisting friends to help, other students soon joined the project. Myron Griffin coordinated five student writers along with faculty assistance to develop the script, Hubbs managed finances, and by February as word spread more than 50 students had become actively involved in its development. From costumes to props to publicity, the collaborative grew in expanse and expense, with grandiose dreams that the film would quickly make them rich and famous.

Thus was sparked a relationship that would result in what is widely considered the first student feature film ever made, 1929’s Ed’s Coed – a romantic comedy written, performed, and produced entirely by University of Oregon students…with McBride’s vital assistance.

The film, which is available to watch for free on YouTube thanks to the University of Oregon, is a fascinating time capsule of college life in the 1920s. From a historic aspect, it documents locations and individuals on campus instrumental in the university’s longstanding growth and success, while documenting many of the traditions and unusual antics of college students in the early half of the 20th century.

Practices such as the requirement of freshmen to wear green “lids” at all times, otherwise, be subject to humiliating paddlings on the steps of the administration building, seems the stuff of obvious lawsuits today, but in the 1920s it was not just commonplace — but expected. Beware any underclassmen who dared to sit on the senior bench, lest they be dunked in the senior fountain, nor get caught wearing cords or the senior patrol will dish out justice. There were tugs-of-war across the Millrace (a man-made waterway next to campus branching off from the Willamette River built originally as a power source for downtown Eugene factories and to float logs to mills), a canoe house for coeds to cruise, a “Hello Walk” between residence halls that required all students to say hello to passersby, and more traditions and unwritten rules that were the norm for students at the University of Oregon captured in the film.

Some sites showcased in Ed’s Coed no longer exist. Outdoor daytime dances were commonly held on tennis courts across from Hayward Field, space now occupied by residence halls. Hayward Field, built-in 1919, is featured as a track facility, including participation in the film by legendary track coach Bill Hayward, for whom the facility is named. While the recent multi-million dollar shining jewel on campus retains the now-iconic name of Hayward Field, none of the original structure remains.

While the Prospector statue that stood on the campus for a century recently was toppled amidst Black Lives Matter protests, some historic landmarks on campus featured in the film still stand. The Senior Bench is largely ignored by students today, as is the now drained Senior Fountain, but both remain visible on campus. The steps of Johnson Hall are prominently featured in the film, which would make film history again nearly 50 years later in 1977 when John Belushi famously falls while attempting to sneak a horse into the dean’s office in the most famous college-life film ever concocted – National Lampoon’s Animal House.

The film also includes several school administrators of the era in the film as themselves, keeping the fictional tale strongly rooted in reality for the time. Some buildings on the University of Oregon campus today are named in honor of individuals who are forever captured on film thanks to Ed’s Coed.

The film follows “Ed,” a lumberjack by trade and accomplished violinist, who is enticed by his college student cousin to attend the university while visiting Ed to ask for money – a college student tradition that tends to still hold true regardless of generation. Ed enrolls, but immediately sticks out among the crowd and is routinely bullied for his appearance and ignorance to the rules of college life, making few friends and being the butt of multiple practical jokes. Determined to succeed, Ed soon wins over the crowd but may have his newfound college life destroyed when he gets blamed for a crime he did not commit. Meanwhile, a phantom violinist roaming campus is the talk of the university and the mysterious object of desire among the sororities.

Despite McBride’s involvement in filming, the production of The Campus Movie was a student-run affair, funded thanks to an audition fee of 50 cents for every student that wanted to try out for a part in the film. Inevitably, over 500 students and three house mothers that tried out during a multi-day test screening event at The Igloo – the newly built on-campus basketball facility now known as Mac Court. All were accepted to be involved in the film in some capacity.

The film was also a brave departure from other college life film efforts of the era, which to that point had almost exclusively centered around a football game or other athletic event as the story’s climax. While track and field do play a small role in the film, the story largely avoids the cliché college jock persona as the protagonist, the students involved adamant to present a more realistic portrayal of college life that wasn’t solely centered on athletics.

From short to the first feature

Originally intended for 16mm film as a short to be taken to regional high schools on a budget of $500 as a test screening anticipated to be about 45 minutes in length, the production soon grew to a feature-length film at an equivalent cost of $48,000 in today’s dollars and converted to 35mm film so that it could be carried at theaters across the country. 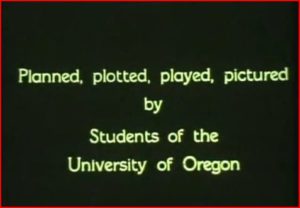 The students’ pooled funds were enough to rent a Bell & Howell 35mm camera from Hollywood for $3,500, thanks to McBride’s connections. Even though the film would be proudly tagged at its start with a text card reading “Planned, plotted, played, pictured by Student of the University of Oregon,” the film’s cinematography and direction were purely a product of McBride’s efforts.

News of the film’s production and the collective of ambitious students began to appear in trade magazines and newspapers across the country, celebrating the brave attempt of amateurism entering the film industry.

There had been earlier attempts at documenting college life. At Cambridge University in 1924 students had produced a half-reel drama titled “The Witches’ Fiddle,” and film clubs appeared at Harvard, Stanford, Dartmouth, USC, Yale, Princeton, Colgate, Minnesota, and Virginia by the end of the decade. Yet none had ventured into the feature-length territory nor delved as deeply into the guise of professional studio productions as had the large team at the University of Oregon.

Production of Ed’s Coed took nearly three months on campus, filming taking place between rigid class schedules for the cast and crew with almost exclusively outdoor shoots. Funds were tight but the crew persevered, completing the film in time for its grand world premiere during homecoming festivities in Eugene on Nov. 15, 1929 at the McDonald Theater. Tickets were sold at $1.25 to see the film, with dignitaries from across the state traveling to Eugene for the event. The film would also see a limited run in Portland in December, but like so many other silent films of the era, the film was dead-on-arrival as far as theaters were concerned in the wake of the release of the first “talkies” starting with The Jazz Singer in 1927.

The film even found its way into the curriculum at the University of Oregon. During the film’s production, a mock trial was staged by law students with cooperation from the cast and crew involving one of the film’s stars, Phyllis Van Kimmel, in a mock breach of promise suit against Jack E. Jones. Ultimately a jury of students following arguments on both sides returned a verdict of $3.95 awarded to Van Kimmel.

Dreams of Hollywood stardom dashed, the film and its vast cast saw occasional screenings in 1930 but nothing on the level anticipated, and the film’s production like so much of the silent era was simply forgotten and discarded. Ed’s Coed was effectively lost until 1952 when staff at the Heilig Theater in Eugene discovered the old nitrate cinema reels during a building remodel.

The reels were given to Dorothy Burke in Portland, who had played the female lead character “Joanne” almost three decades earlier. Her husband, Milton Rice, collaborated with the University of Oregon Library to transfer the movie from flammable nitrate film to 16mm safety film, along with several copies of the film made for other original cast members. Thereafter the only original 35mm negative print was destroyed.

In recent years the salvaged nitrate reels converted to safety film have found a new life. The original music sheets long since lost, a University of Oregon professor wrote and recorded a new film score, and the University of Oregon Library posted the film online. It has been routinely shown to Cinema Studies students at the University of Oregon, and for a time a Hollywood film producer with ties to the university fell in love with the story behind the film and sought to develop a production highlighting the ambitious students’ story in a film that was to be called Let’s Do it! The production failed to gain proper funding and was eventually abandoned.

Yet Ed’s Coed improbably survives, a relic of the silent film era and one of the few true-to-life film representations of a bygone era of college life and a foundation of filmmaking – the first step that fundamentally proved that feature-length student films are possible.