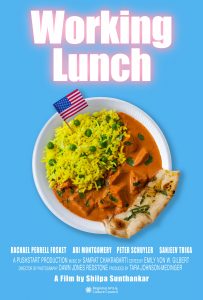 Portland, Oregon – December 3, 2018 – The much anticipated short film, WORKING LUNCH, by Portland-based Director and Producer, Shilpa Sunthankar, is set to have the Portland Premiere on Wednesday, December 12, 2018 at The Whitsell Auditorium. Director Shilpa Sunthankar will be in attendance.The film previously had a successful world premiere at the 19th Annual Filmi: Toronto’s South Asian Film Festival and was selected as part of the 2018 Fall Screening Series by New Filmmakers, New York.

Statement by Shilpa Sunthankar: “At its heart WORKING LUNCH is a portrayal of our current national conflict, in miniature, via a tiny Indian restaurant. When hearts and wants are so disparate across the aisle and across cultures, I feel it’s important, now more than ever, to relay stories about the connections which make us the country that we are together, and stand against hate.”

The film tells the story of how a regular work day for an Indian-American, a queer professional, and a Trump voter is changed when they find someone has scrawled graffiti on their lunch restaurant. They come together to remove the message of hate themselves with a unique solution.

Shilpa Sunthankar is a screenwriter, director, and producer with an affinity for stories about different cultures in coexistence, thanks to her background as an Indian-American woman raised in the “cowboy country” of Colorado. Her experience has spanned the worlds of independent film, animation, and commercials, as well as creative agencies like Wieden + Kennedy and Ziba. She was awarded Best Director at the Los Angeles FirstGlance Film Festival for her short thriller, THE COMPANY OF THIEVES,  which was also licensed by the ShortsHD Channel and launched on IndieFlix. Her award-winning short, BIOGRAPHY OF AN AMERICAN HOSTESS, was licensed by the Canadian Broadcast Corporation. Shilpa graduated with honors from New York University’s Tisch School of the Arts after interning for BBC London, and attending the 35mm Filmmaking Master Class at FAMU in Prague. She now lives in Portland, Oregon and is working to direct her first feature, CONTINENTAL DIVIDE, an outdoor thriller taking place on the U.S.- Mexico border.