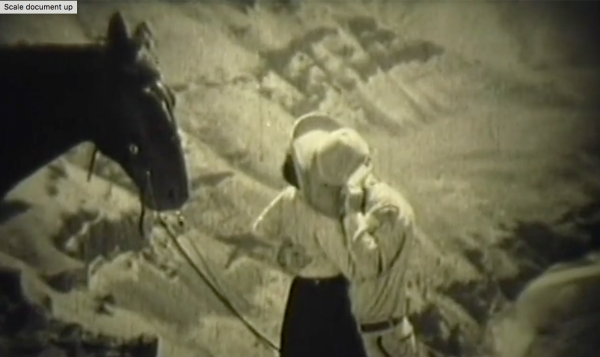 If you find yourself strangling your steering wheel in frustration while parked in bumper-to-bumper Route 206 traffic on the way to your overbooked hotel room in downtown Condon for the eclipse, you may want to consider the plight of the poor Mercer family (or better yet, see if you can find it on disc for the SUV’s back-seat DVD player and pop it in when the kids in the back seat start losing their minds).  In this silent B Western (silent western?  Ok, the kids will hate you if you make them watch it), a small family makes its way westward “just south of the Old Oregon Trail,” as the title card reads, looking for a nice place to homestead; instead, they find hardship and woe.  And, as will sound familiar to SUV-driving parents of young-uns, they find boredom, too.  As the comely teenage daughter whines to her dad, in a sagebrush version of kids’ eternal Are We There Yet lament, “Will we get there?”; her mom, in a similarly eternal gesture of frustration, counters “Stop asking your father so many questions!”

Unfortunately for the Mercers, boredom is the least of their problems, as calamity quickly befalls them: gun-totin’ cattle rustlers steal their horses and head off alongside the John Jay River, leaving them stranded.   What at first appears to be another approaching crisis — a drunk cowboy passing along the trail — turns out to be a calamity of a different sort: Calamity Joe that is, a “seldom sober” cowpoke with a heart of gold, and the hero of our picture.  Before the 50 minute flick ends its last reel, Joe has beaten up a passel of bad hombres, helped the family establish their Condon ranch, given up likker for good, and won the heart of young Billie Mercer (and I’m betting you saw that coming). 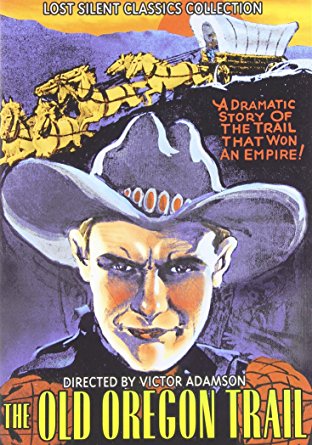 What’s most noteworthy about the film is the way it captures unspoiled majesty of the John Day River cliffs and the late 1920s burgeoning of downtown Condon (“A gateway of vast resources,” explains a title card).  Writer-Director-Producer “Denver Dixon” (aka Victor Adamson — father of trash-cult filmmaker Al “Satan’s Sadists” Adamson!) probably should have handed some of the writing duties over to someone else (there’s a head-scratching decades-long leap in the story, which at least allows gearheads to see some cars anachronistically zooming through an oater), but he, and cinematographer Paul Allen, allow us to see beautiful images of what Eastern Oregon looked like in the ‘20s.  And in stunning, blazing daylight — 89 years before it dips into daytime darkness for a couple of minutes on August 21.

You can stream The Old Oregon Trail on Fandor and watch a trailer of it here.