“Inspirational! Why waste 4 years at a film school? I took Dov’s class and launched my career.” – Quentin Tarantino 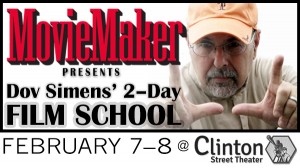 For decades, Dov Simens has taught the secrets of the film business to aspiring filmmakers through his “2-Day Film School,” and the results speak for themselves. Dov’s students include Quentin Tarantino, Guy Ritchie, Will Smith and Baz Luhrmann, who have gone on to write, direct and produce critically and commercially successful films. His 75,000 students have gone on to gross over $14 billion at the box office, combined.

MovieMaker Magazine is proud to present Mr. Simens in a one-time-only engagement at the historic Clinton Street Theater in Portland. We’re excited to be partnering with the Clinton Street Theater, and space in the venue is limited – visit www.moviemaker.com/moviemaker-institute to register. If you register before January 26th, you’ll also receive a free 1-year subscription to MovieMaker Magazine – 5 full issues, over $35 newsstand value.

Dov insists that filmmaking is a business: “Well, I know it’s an art, but you can’t teach talent,” he explains. “I can teach business; I can teach you how to make and sell a film.”

Join us, and discover why filmmakers, screenwriters, producers, directors, writers and actors around the world have learned the secrets of independent filmmaking from Dov Simens, voted by the National Association of Film Schools as America’s “#1 Film Instructor.”

MovieMaker, “the Art and Business of Making Movies,” is the world’s best-selling independent film magazine. Published five times per year and distributed internationally, the magazine focuses on the art and business of making movies with a special emphasis on independent film. MovieMaker’s core readership is comprised of all levels of working moviemakers; editorial content satisfies this constituency by reporting from the independent, digital and studio sectors. Feature article topics include moviemaking techniques and trends, artist profiles, technology reviews and new product updates. Founded in 1993, the magazine has wide crossover appeal, and enjoys a loyal special-interest consumer readership of 150,000. Its companion website is one of the most popular movie sites on the web. Content is directed at the audience as well as the artist through intelligent discussion of quality contemporary independent, studio and classic cinema. Distributed to newsstands and subscribers 5x/yr with special distribution in LA and NYC, MovieMaker maintains partnerships with the industry’s leading festivals, schools and film companies.