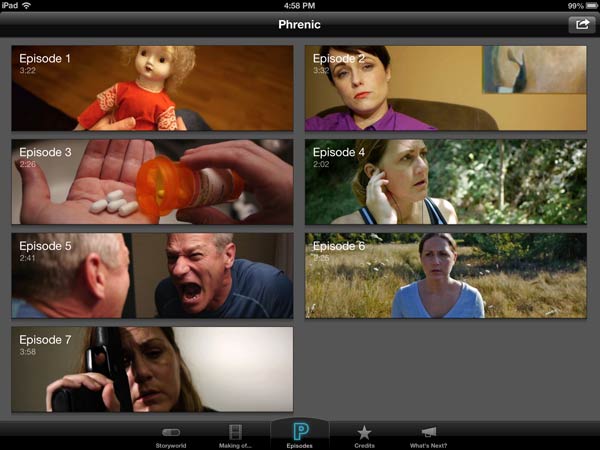 Phrenic, my futuristic thriller made in Portland, premiered in the App Store this week. Not in a theater. Not on YouTube. In the same App Store where you go to download Temple Run or Angry Birds.

I began thinking about creating a story for mobile devices last year when I realized I was watching fewer feature films but binge-viewing full seasons of compelling TV shows. What if I could make a miniature version of this experience? Smaller in terms of budget and scale, but also shorter episodes that could be watched on the bus or–let’s face it–in the bathroom.

I soon realized mobile entertainment needs to involve more than simply video. Audiences expect interactivity on a phone so I expanded my story to include games, interactive fiction, and websites that actually served as characters–not as marketing.

The Phrenic app is an ongoing story that combines episodic videos, mobile games related to the plot (including a biometric clone detector), and a Choose Your Own Adventure story with over 30 possible endings. The app also includes DVD-like bonus features, including behind-the-scenes photos, a “making of” article, and info on the actors and filmmakers.

The story of Phrenic focuses on Alison Taylor (Audrey Walker), who plans to kill her husband in seven days. Alison hears objects talking to her, telling her she won’t be safe until her husband is dead. Her husband, Frank (Steve Mattsson), works for a nanogenetics company called Life Identical and he wants to make sure Alison gets the help she needs by taking medication and going to psychiatrist Katherine Trunk (Lanie Hoyo). But something about Frank seems… different.

With a mobile platform comes a mobile payment model, which makes Phrenic different than crowdfunded indie films or a YouTube web series based on advertising. The games, extras, and first two episodes in Phrenic are free, with episodes 3-7 available as a single In-App purchase. More content will be added, both for free and as In-App purchases. Those purchases fund the production of future content.

I’m excited about the possibilities of storytelling on mobile devices. My goal is to keep audiences engaged over time, similar to a TV show–only on a screen you carry everywhere you go.

Watch the teaser trailer below, download Phrenic for free on the App Store, or find out more at PhrenicWorld.com.