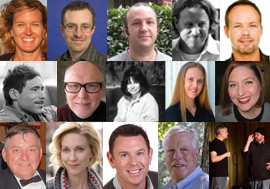 Get the inside scoop on the indie film industry from a leading Hollywood executive and more than a dozen local experts when the 2012 NW Film Finance Symposium convenes on Friday, March 9, and Saturday, March 10.  Presented by OMPA and POWFest, this year’s event will feature Stephanie Slack, Senior Vice President, Co-Productions & Acquisitions for MarVista Entertainment in Los Angeles.

“Community Conversation: The Way Forward!” We are asking feedback as OMPA develops more seminars on Financing, Marketing and Distribution in winter 2012-13.

2012 NW Film Finance Symposium is organized by producer and actor Christopher Toyne for OMPA and is also the moderator for both sessions.  Event sponsors include MarVista Entertainment and Gale Creek Insurance.

sim-ˈpō-zē-əm:  1. A collection of opinions on a subject.
2. A gathering at which there is free interchange of ideas.
3. A meeting at which several specialists deliver addresses
on a topic or on related topics.
4. A convivial party with music and conversation!