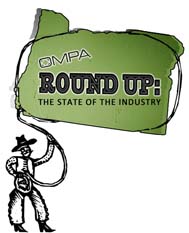 OMPA and industry members speak up on where media production is at in Oregon, and where it’s going!

OMPA invites you to an industry-wide conversation to consider and plan for the future of Film, Television, Animation, New Media and Visual Content production in Oregon, with special consideration of the status of Oregon’s film incentive program.

A panel of special guests address the issue of creating self-sustaining industry growth, how to finance it, and continue to build on Oregon’s growing reputation as a world-class media production center.  Speakers include business people from the production industry as well as some of the ‘best bets’ for profitability among Oregon producers.

This Roundup is presented in conjunction with OMPA’s Northwest Film Finance series, which shares contemporary practices of finance, distribution and marketing to Oregon filmmakers.  One of the intended goals of this event as well as the Northwest Film Finance seminars, is to make connections between the business interests of Oregon’s production industry and the broader financial community that fuels Oregon investment.

The Scottish Rite Center is a new member of OMPA, and featured in TV’s Leverage.  An exceptional and centrally located venue for auditorium and/or ballroom events, meetings, location filming and VIP receptions.

2 thoughts on “OMPA Roundup: The State of the Industry”