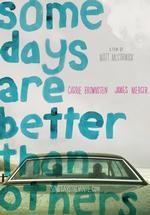 Local Director Matt McCormick’s film “Some Days are Better Than Others” begins a run at the Living Room Theaters tonight in Portland. Here are some details about the film.

Some Days are Better Than Others is Matt McCormick’s poetic, character-driven debut feature-length film that asks why the good times slip by so fast while the difficult times seem so sticky. The film explores ideas of abundance, emptiness, human connection and abandonment while observing an interweaving web of awkward characters who maintain hope by inventing their own forms of communication and self-fulfillment. Continue reading... “Local Film “Some Days” at Living Room Theaters”