Film Tourism is growing, becoming a more robust niche sector of cultural tourism every year, and remarkably Oregon has hundreds of incredible locations that have starred in films, TV series, and high-profile commercials since the silent movie days of 1904.  In order to build upon this growing tourism niche, the Oregon Film Trail has been slowly rolling out Trail stops over the past two years (currently at 33) all highlighting the State’s important contribution to the film and TV industry and (seemingly unlikely) community partnerships all across Oregon.

Continue reading... “Stories From The Oregon Film Trail – How Are The Oregon State Museum Of Mental Health, The Oregon Dept. of Corrections & Depoe Bay Harbor Linked?” 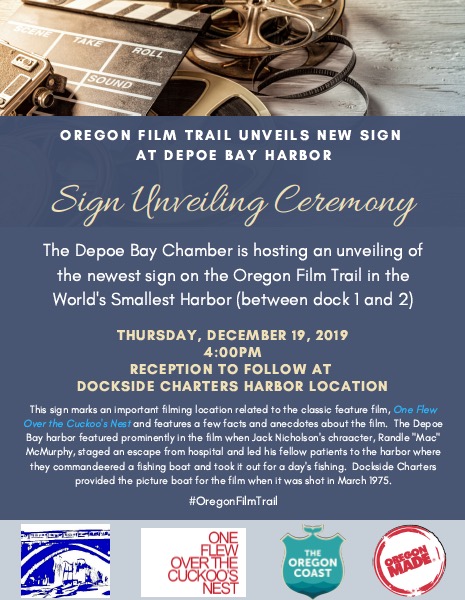 Two Oregon Film Trail signs were unveiled over the week end honoring Salem’s starring role as a location for “One Flew Over The Cuckoo’s Nest” (the honors being done by Oregon Museum of Mental Health Museum Curator, Megan Lallier-Barron and Dennie Brooks, Board Member.)  The signs mark two different filming locations related to the now classic feature film, “One Flew Over The Cuckoo’s Nest,” and feature facts and anecdotes about the film. Continue reading... “Oregon Film Trail Continues In Salem”