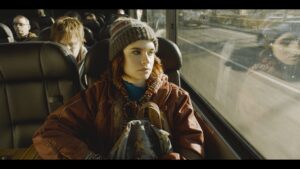 Fresh off of her appearance in The Lord of the Rings: The Rings of Power, rising star Ema Horvath is taking on a more personal role with the coming-of-age drama Who Are You People. Horvath leads the film as Alex, a 16-year-old who gains more perspective on her life as she learns of the circumstances that surround her. After her parents interrupt her attempt to seduce her teacher, she seeks out her biological father Karl (Devon Sawa) whom her parents had always kept secret from her. Although she believes meeting him will magically give her all the answers to who she is, she’s only left with more questions in the end.

Who Are You People was written and directed by the multitalented Ben Epstein who is perhaps best known for creating the MTV dramedy Happyland. He has a wide-ranging career, creating and directing two seasons of In the Vault, currently developing a pair of shows for Netflix and Lionsgate, penning a screenplay on Michael Jordan’s short-lived baseball career, writing multiple issues of the Teenage Mutant Ninja Turtles comic book, and having his work appear in the Rattling Wall Literary Journal. Who Are You People marked another first for Epstein as it was his feature directorial debut.