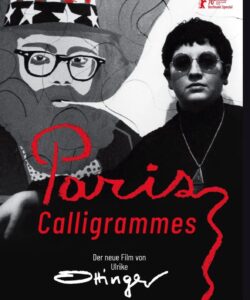 The Portland German Film Festival shows in our Monthly Film Series, a variety of GERMAN or GERMAN language films from Germany, Austria, and Switzerland. On the 2nd Tuesday of each month, audiences will have a chance to see these films on a regular basis at the CLINTON STREET THEATER. (Children’s movies will be playing on Sunday afternoons – please check our website.) All films are with English subtitles.
PARIS CALLIGRAMMES (Paris Calligrammes)
Tuesday, March 14, 2023 – 7:00 PM
Germany/ France 2019, 129 min
Directed by Ulrike Ottinger

“In Paris Calligrammes, the artist Ulrike Ottinger casts a highly personal and subjective gaze back to the twentieth century. At the heart of her film is Paris: its protagonist is the city itself, its streets, neighborhoods, bookstores, and cinemas, but also its artists, authors, and intellectuals. It is a place of magical appeal, an artistic biotope, but also a place where the demons of the twentieth century still confront us.” – Bernd Scherer

In many of her films, exhibitions, and books, Ulrike Ottinger has portrayed herself as an ethnographer who takes us on long journeys to foreign cultures, showing herself participating in people’s daily lives and rituals. We sat together in Mongolian tents and attended the ceremonies of the female shamans; we were eyewitnesses to the winter rites which are celebrated amidst the Japanese New Year festivities; we retraced the tracks of the great global explorers; and we were introduced to the northernmost inhabitants of the Arctic, observing them fishing and going about their daily work.

With her new film, Ottinger opens a very different chapter to these expedition films. We now embark on a journey through time, leading us back to Paris in the 1960s. Uto- pian research differentiates between spatial and temporal utopias, but this film is both. It is a spatial utopia going, not to the ends of the world or into uncharted territory, but into the heart of the Parisian metropolis, and also a temporal utopia whose time lies, not in the future, but in the past. It is an autobiographical journey back to her own youth, to the years of her all-important coming of age.

Focusing specifically on this phase of her life, Ulrike Ottinger’s film forges a bridge between the then and now. Images intersect, meld, and overlap. This is at its most evident when the artist reappropriates the shop window of the former Librairie Calligrammes — in Saint-Ger- main-des-Prés quartier, Paris — for her own exhibition. Momentarily, the window display is swept clean and adorned with her own treasures: the collection of books she acquired at the time and which she has assiduously cultivated throughout the intervening years. Just like the window display, the entire film abounds with impressions, experiences, and memories. Yet, the period fifty years ago, the ”past present“ that she so vividly brings back to life, is receptive in equal measure to both the burden of a traumatic history and to the allure of an experimental and vibrant future. 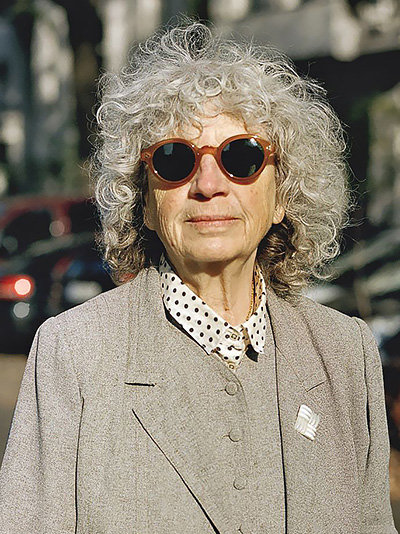 Born in Konstanz, Germany in 1942. She worked as a painter and photographer in Paris from 1962–1968. She founded the Visuell film club in Konstanz in 1969, and led it until 1972; she also founded galeriepress, an art gallery and press. She has lived in Berlin since 1973. Alongside her film work she also produces operas and theatre and is present on the international art scene with photo exhibitions.

Here is the link to the trailer.