With editor Enie Vaisburd (Pacific University), Ellen Thomas (Educational Director PAMCut) co-lead the Portland creative team which just completed experimental filmmaker, Bushra Azzouz’s new feature documentary, A Midsummer Night’s Dream In Prison.  The film is about a group of inmates at the Two Rivers Correctional Facility in Umatilla who put on a Shakespeare play and, in the process, reimagine their lives.

The World Premiere is Sunday, August 7, 6pm at Cinema 21.  A number of the inmates, now released, will be in attendance for a post film Q&A.

Inside the locked walls of the Two Rivers Correctional Institution near Umatilla, Oregon, cell doors slide open and a group of inmates begins work with visiting theater director Johnny Stallings. Over the next few weeks, as they cast, rehearse and perform William Shakespeare’s comedic tale of love and reconciliation, A Midsummer Night’s Dream, Iraqi-born Portland experimental filmmaker Bushra Azzouz is there among the costume fittings, meals on plastic lunch trays, and deeply personal side conversations to apply her deft hand as a cultural interpreter and activist storyteller. Through her watchful eye, in contrast with societal assumptions about crime and the incarcerated, what she finds is exterior personas softening, meaningful relationships forming and life stories being reimagined, taking us – as she has in her earlier films about ancestry, war and pain – to the roots of our common humanity and celebrating the hopes and dreams in us all. 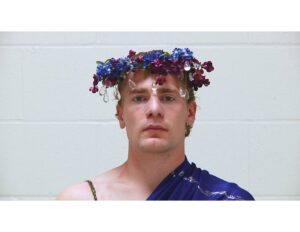 The World Premiere of A Midsummer Night’s Dream will lift up the many individuals, artists, donors, and friends who have come together around the completion of the film and the life of its director, Bushra Azzouz (1955-2019). Producers will introduce the film and host a Q&A following. Invited guests include inmate participants (now released).

A Midsummer Night’s Dream In Prison is the last film in the body of work by Iraqi-born, Portland experimental documentary filmmaker Bushra Azzouz. In her 30+ year quest to explore identity, transformation, and resilience through film and the arts, she also directed And Woman Wove It In a Basket (with Nettie and Marlene Farnum), about Klickitat traditional arts; No News, a meditation on the horrors of 9-11; and Women of Cypress (with Vassiliki Katrivanou), profiling two journeys through war and pain to reconciliation and common ground. As Lead Faculty at the Northwest Film Center School of Film  (now PAMCut) for more than two decades, she mentored hundreds of emerging artists in classroom and community settings throughout the State. She was a graduate of Reed College (BA, Theater) and San Francisco State University (MA, Film).

One thought on “One Night Only – World Premiere: A Midsummer Night’s Dream In Prison”