The #OregonMade Mural and Poster Exhibit has been up in the Portland International Airport’s south pedestrian tunnel for two years now, (located underground between baggage claims 3 and 4, connecting the parking garage to the terminal). The mural and exhibit provide travelers with over 160 uninterrupted feet of art and film posters, representing a small collection of Oregon’s rich film history. Recently four new posters were added to the exhibit, “Shrill”, “Trinkets”, “Phoenix, Oregon” and “Timmy Failure: Mistakes Were Made” in a planned “refresh” to add in more projects that recently filmed in Oregon.

This exhibit celebrates the unique and varied locations Oregon has to offer, as well as the productions that have called Oregon home over the years. Additionally, it brings attention to some of the professional production communities that come together to make Oregon so film-friendly.  We have witnessed passengers walking in the tunnel that enjoy seeing where these movies and TV shows have filmed and often spark conversations between strangers.

Since 1909, Oregon has played host to over 500+ shows, all of which have utilized the state’s varied backdrops, from the early silent-era film, “The Fisherman’s Bride”, shot in Astoria, to more popular television series like, “Grimm”, “Portlandia”, “Shrill” and “Trinkets” that have called Portland home.

An illustrative interpretation of Oregon’s seven general geographic areas (Oregon Coast, Portland Region, Mt. Hood and Columbia River Gorge, Central, Eastern, Willamette Valley, and Southern Oregon) runs along the bottom length of the mural, indicating the various areas in which these projects have filmed over the last 50 years. The exhibit currently highlights 21 of the some of the most recognized #OregonMade productions, each with a plaque that describes the locations used. 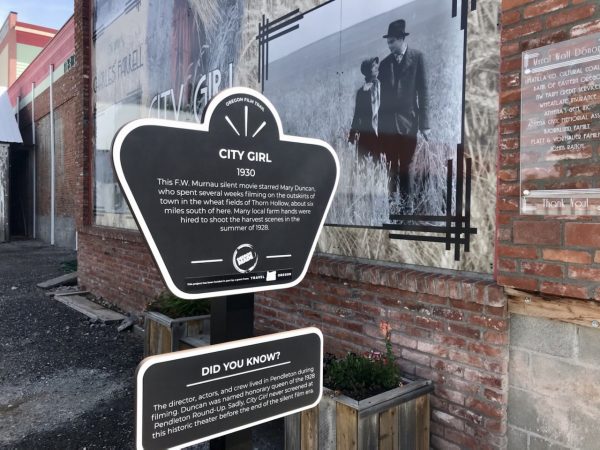 Every year, Oregon locations draw interest for film tourists from all over the world, as well as fostering a “pride of ownership” in the Oregon communities in which these projects have filmed. The PDX exhibit has been seen by approximately 38 million travelers* that have passed through the south pedestrian tunnel in the last two years, some of whom may already be familiar with the filming locations and #OregonMade shows, and many others who have enjoyed the opportunity to learn more. The mural and exhibit bring a visually impactful interest to the tunnel and it focusses attention on our amazing Oregon locations and the state’s worth as a versatile production destination.  The mural and exhibit were created in support and collaboration with the Portland International Airport and the PDX art program and made possible through the generosity of our partners, who came together to provide funding (see list below).  The mural and exhibit help support the Oregon Film Trail that has slowly been building across the state.  Oregon Film, in partnership with the Oregon Made Creative Foundation, created the Trail with initial collaboration from the Astoria-Warrenton Chamber of Commerce.  It features signage located at strategic points around the state that pinpoints where many of the well-known productions have filmed over the years. The creation of the Trail aims to strengthen the correlation between the film/TV industry, economic development, and tourism as well as celebrating unique Oregon locations that are iconic in their own right. 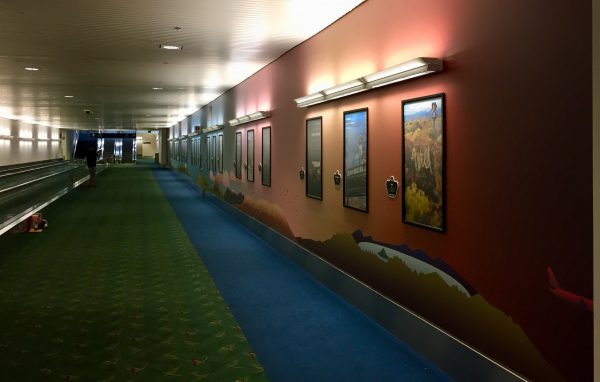 Travel Portland – Travel Portland believes in the transformative effects of both travel and filmmaking. We support our region’s economy by marketing the Portland area as a preferred destination for conventions and leisure travel. And we celebrate the films that bring Portland stories to the world — and jobs to the local creative community.

Darren Cools illustrated and designed the mural in collaboration with Oregon Film -Darren Cools has been drawing and designing for a living since 2008. His independent client work includes Oregon Film, Adidas, Daimler Trucks, and Portland Metro, as well as many small businesses. He is currently the Creative Director for a large non-profit and likes to write in his spare time. He lives in St. Johns in Portland, Oregon, with his wife, three children, and one cat. Darren loves to ride bicycles, run, swim, talk around campfires, and spend a lot of time reading books.

* the Approximate number of travelers who have used the South Pedestrian Tunnel over the last two years – numbers provided by the Portland International Airport.