Eastern Oregon Film Festival is proud to announce its Official Selections for the 2018 Festival. An intimate gathering nestled in downtown La Grande OR, #EOFF2018 will feature film screenings, special events, and live music at The Granada Theatre and our own creative space, hq, as well as an Online Program consisting of 14 films—exclusively available to watch at Filmmaker Magazine.

#EOFF2018 will open with director Bridey Elliot‘s hilariously-spooky debut feature CLARA’S GHOST (pictured above), in which she cast her entire family to play its dysfunctional protagonists. Friday night will wrap up with newcomer Erik Bloomquist‘s unsettling, psycho-horror drama LONG LOST about two brothers meeting for the first time. The final screening and closing night feature is none other than EOFF Alumni and community favorite Jim Cummings‘ heartfelt comedy about a cop who loved his mom, THUNDER ROAD! 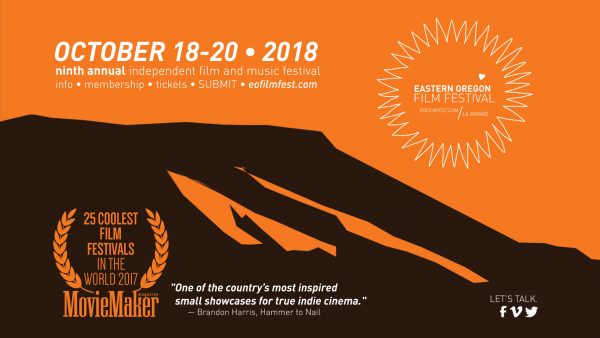 On December 11th, 2012, a shooter entered Clackamas Town Center Mall near Portland and opened fire with an STAG-15 assault-style rifle, killing two people and injuring one before taking his own life.

A wayward teenager goes missing and her friend is haunted by her disappearance.

A nature ‘documentary’ depicting the mating rituals of Dasypus novemcinctus aka the nine-banded female armadillo.

What if your country was swallowed by the sea? Kiribati is a remote place on Earth and yet one of the 1st countries facing annihilation from sea-level rise.

A woman struggles to learn the fundamentals of basketball.

Backwoods poet Joe Sawyer takes the viewers on a first person journey into a rich past, riddled with escapades, and a present that offers humor and clarity through his poetry.

Set over the course of a single evening in suburban Connecticut, Clara Reynolds—fed up with constant ribbing from her self-absorbed showbiz family—finds solace in and guidance from the supernatural force she believes is haunting her.

A U.S. combat veteran recovering from a traumatic brain injury (TBI) attempts to find a job in the civilian world.

Hanna Bohman is a Canadian civilian who has spent the last three years in Syria as a volunteer soldier battling ISIS.

A woman’s love for her pet ducks and chickens—all 200 of them—begins to threaten her marriage and draw attention from local animal rescuers.

Ingrid left her life as a successful fashion designer and mother in Texas to become a reclusive hermit immersed in nature, focused solely on creating art.

Ann is consumed by the fantasy of finding true love. Just when she thinks she’s found it, she is friend-zoned.

Religious people in the village of Kerloster seek out Baptiste, the youngest of three orphaned teenagers known for his divine connection to Sain-Yves-de-Vérité, to solve their problems.

In a high school theater class, Krista uses her scene study as catharsis.

When Seth receives a mysterious letter inviting him to spend the weekend at a secluded mansion in the country, he soon realizes the people inside the house may know him better than he knows himself.

Long before Disney and the other animation giants, Lotte Reiniger ignited the screen with shadows, light, and a pair of magical scissors.

Meredith is infatuated with the marble statue ‘Perseus with the Head of Medusa’ at the Metropolitan Museum of Art.

A vagabond apartment guest and the apartment owner must set aside mutual resentment as they attempt to fix a badly clogged toilet.

The residents of Louisiana never know what will attack them next: floods, hurricanes, or the monstrous swamp rats known as nutria.

A glimpse into the controversial, 1996 court case that decided the fate of the ‘Kennewick Man’.

A philosopher, inventor, and farmer, Cal shares with us the deeply intricate workings of his life as a sharecropper on 22 acres in rural Iowa.

A found footage documentary about Morgellons, a mysterious illness whose sufferers say they have parasites under the skin, long colored fibers emerging from lesions, and a host of other bizarre symptoms which could be borrowed from a horror film.

After suffering a near fatal head injury, a young cowboy undertakes a search for new identity and what it means to be a man in the heartland of America.

When Michael’s attempt at suicide awakens a psych ward demon, he must stop her before she kills everyone in the hospital he connects with.

During the summer World Cup, 11-year old Boyko will do anything to obtain ‘Brazuca’— the Official World Cup ball, in order to prevent his friends from using him only as a goalkeeper.

A meditative exploration of childhood and loss.

An observational documentary exploring the daily lives of vendors who work in the largest wholesale consumer market in the world: the Yiwu Markets in China.

This 360-degree perspective suggests an all-seeing omniscience, but the dancer’s movements reveal the limits of the camera.

Two filmmakers scout their next movie.

In the wake of his brother’s death, a quiet high schooler navigates his small Texas town, all while knowing he is responsible for the accident.

A video essay and response to the artist’s experience working as a stripper.

An underachiever takes part in a bizarre women’s self-help group. Will she succeed?

Marc Norton created a string of bizarre, late-night commercials for his business, Norton Furniture in Cleveland OH. This is his story.

An exploration of performance and self takes the form of an acting reel.

A lo-fi portrait of Jay Wade, a New York City steamfitter from El Paso with a mysterious past and an insatiable passion for music and numbers.

An accidental meeting in Manhattan reveals a burgeoning relationship between two out- of-towners.

A celebrity interview format interrupted by hallucinatory dream sequences, during which eco-chic pop star ‘Echo’ relives her private reckoning in the wake of public infidelity.

A lonely spinster’s failed attempt at arranging flowers summons an ominous shadowy figure who sends her into a psychedelic netherworld to confront her own mediocrity.

Festival Passes & Ticket Information will be available on our website September 1. Be sure to check out the perks of FESTIVAL MEMBERSHIP as well as our SPONSORSHIP opportunities, and expand your brand in front of our world-class audience and community!