The New Year (literally) rolls in with a vengeance this week as our intrepid Raider/Contributor takes us behind the scenes of Portland’s much beloved Rose City Rollers. There’s language to be wary of below and in the film itself, so if that kind of thing isn’t your proverbial cup’o’tea then stop here; but if that doesn’t daunt you, then paste on your Cadillac tattoo, strap on your helmet, lace-up your skates and bring your best James Caan and Raquel Welch impersonations because this week, we’re embracing Brutal Beauty. 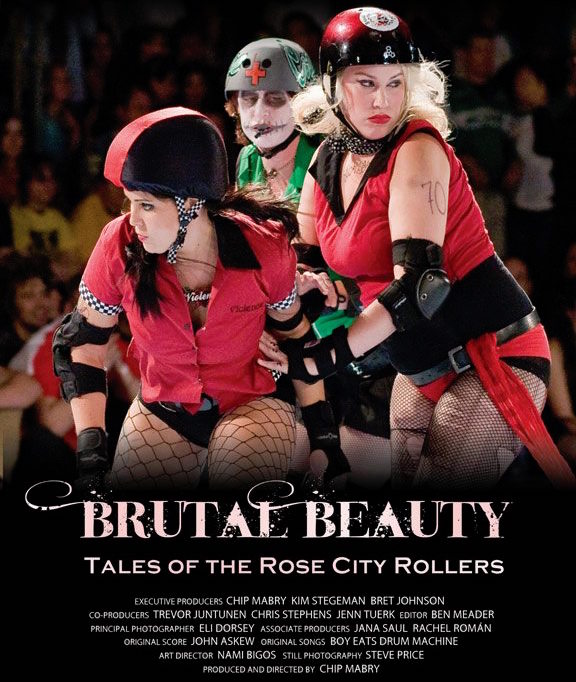 If you’ve been following this column, you know that I recently paid my respects to the now-gone Sandy Blockbuster Video, one of the last-remaining links in the chain of video stores that once dominated the American home video landscape.  While saying so long to the store, I also seized the opportunity to pick through the thousands of discounted DVDs that were being offered for one last sale (before they got carted off to the great movie store in the sky), scavenging upon the still-twitching corpse of the store (at least I wasn’t alone).

I found some real gems among the hundreds of copies of picked-over lame comedies-you-never-heard-of, Wesley Snipes direct-to-DVD movies, and exercise videos.  My keepers included Ray Harryhausen’s original Clash of the Titans (1981), the recent animated Batman: Return of the Caped Crusaders (2016 — Adam West’s last voice work as Gotham’s Finest), Steve Coogan’s Alan Partridge film (which played theatrically in the US for about 15 minutes in 2013), and, in a nod towards Blockbuster itself, the trippy VHS comedy Be Kind Rewind (Michel Gondry, 2004).

What I was most hoping to find, though, was some indie #OregonMade films that I hadn’t known about before, a way to stage one last Raid for the Confluence.  I flipped through lots and lots of movies featuring the likes of Sinbad, Pauly Shore, and Rob Schneider before I struck gold: producer and director Chip Mabry’s documentary love letter to the burgeoning Portland roller derby phenomenon, Brutal Beauty: Tales of the Rose City Rollers (2010).

Mabry’s film follows the traditional arc of sports documentaries, from my recollection of contentedly falling asleep during them on Saturday afternoon TV (full disclosure: I’m not much of a sports fan).  Viewers get treated to the thrills of victory and the agonies of defeat, watching athletes prepare for battle against a variety of adversaries as they dream of being on one of the teams fortunate and determined enough to make it to the Nationals. It’s a familiar tale.

What makes this film different, though, is two-fold. First, Roller derby itself has a contemporary sizzle; once consigned to junky UHF stations and lousy time periods from the early days of TV forward, and derided as non-sport entertainment by jock-watchers (like its twin, professional wrestling), roller derby bounced back in the last decade as a rock-em-sock-em venue for assertive, self-actualized Third- and Fourth-Wave feminists, alt-culture aficionados, and hipsters.

Secondly, Mabry has chosen the athletes he profiles extraordinarily well.  The women of the Rose City Rollers are all interesting, fun, unpretentious, and open to Mabry’s inquisitive camera.     There’s “Angry Wrench,” an injured skater who’s forced to sit out the season, but still brags on her “beer drinkin’, bar fightin’ group of ladies.”  There’s the African-American skater who goes by the Portland-provoking sobriquet “White Flight”; she’s a site director for an afterschool program during the week, and a basher on the weekends.

“Cadillac” sits for a tattoo of the luxury car’s logo across her arm as we meet her; she explains that, “it’s not my nickname … it’s everything.”  “Madame Bumpsalot” waters her backyard garden during her interview, explaining that derby gave her psychological release after her dad’s aneurism; it also helped her find likeminded local women who “are not a bunch of pussies.”  “Blood Clottia” has perfected the baadasss staredown, and convincingly talks a lot of trash.

It’s hard for “Marollin’ Monroe” not to steal every scene she’s in; she’s got a big personality, a way with (dirty) words, and a flair for glitz, with her platinum tresses (with pink highlights) and red lipstick solidifying her statuesque Marilyn retro-cool appeal (that’s her on the poster, on the right).  She also expresses the roller derby skater’s credo, in earnest, heartfelt simplicity: “Roller derby saved my soul.  It will yours, too.  I promise.”  And I promise you this — I’m not going to be the one to tell her otherwise.

Mabry profiles a few men, too, but they’re mostly there as moral support for their ladies — and it’s the same kind of refreshing to see them relegated to a second-tier position as it is to see Wonder Woman tossing around German soldiers in the No Man’s Land sequence of Patty Jenkins’ movie.  As an enthusiastic fan/boyfriend explains, “I’m fine with me being the cheerleader and her being the quarterback.”  One guy makes even more of an impression, albeit in a somewhat subordinate role: “Rob Lobster,” the Coach for Team High Rollers.  During bouts, Rob’s pepping his players up and reviewing their playbook; during his day-job gig, Rob rolls dough as a baker for Portland’s Voodoo Doughnuts.  In a hilarious scene, Rob uses striped, frosted, and old-fashioned doughnuts to explain all of the positions and strategies for the sport — leaving this viewer convinced that there is a method to the skaters’ madness, even if it still just looks like everyone’s just going around in circles and shoving each other till a ref blows a whistle.

If you know a young girl who’s a fan of roller derby — perhaps as a result of reading Portlander Victoria Jamieson’s terrific graphic novel Roller Girl — a cautionary note: the language in Brutal Beauty is meant for adult ears.  The ladies’ unfettered, raunchy outbursts aren’t “locker room talk” about sexual exploits, as some have recently defined the term, but fun, raunchy expletives either aimed at adversaries or expressing unbridled enthusiasm for the game, and are absolutely a key component of the film’s charm.  One skater kicks off a bout grinning that, “it’s a beautiful day — for an ass-kickin’!”; another offers, “I wanna see us kick some lipstick off some bitches tonight.”  When facing the San Francisco team, Cadillac explains that “it’s about killing Bay Area, because I fucking hate those bitches.”  Angry Wrench describes the derby as “going to a bathhouse with no condom.  Every Friday.”  Roller Derby is, as several skaters indicate, a form of release, of full-body anger management; the Rollers talk like athletes tanked up on too many Voodoo Doughnuts and RockStar Energy Drinks (both sponsors, btw).  Sensitive viewers may want to keep their thumbs on the mute button (and we can all imagine pejorative term the Rollers might reserve for “sensitive viewers”).

I don’t know about you, but all this derby talk has me feel like I’m crusin’ for a bruisin’ myself; it sounds like it might be time to re-watch Raquel Welch’s Portland-lensed roller derby classic Kansas City Bomber (1972).  See you ‘round the track …

Watch: There are used and new copies of the DVD Brutal Beauty available on Amazon.  I’ll be donating my copy to Movie Madness soon, so you’ll be able to rent it there, too.

Show your support: The Rose City Rollers season opener is this Saturday, January 13th!  It’s sold out, unfortunately, but you can still grab tickets to the RCR Juniors bouts on Sunday, January 14th.  In the meantime, the RCR site will happily sell you a bunch of swag you definitely need in your life.

Eat: Club 21, the site of the conversation that started the whole RCR phenomenon, is, sadly, gone forever, ending its 80-year reign over Portland’s dive bars last year (though its remains have been repurposed at The Lay Low Tavern).  However you can eat yourself into a carb coma at Sellwood’s Bertie Lou’s, just like Cadillac and her man do in Brutal Beauty.  Maybe you’ll get lucky and see some roller girls before a bout!

Listen: IMDb helpfully lists all of the songs on Brutal Beauty’s killer soundtrack; with a little bit of work, you can re-create the musical experience of Portland circa 2010 for your own earbuds.  In the meantime, check out the indie treasure Dirty Mittens (now disbanded) playing inside Old Portland Hardware.  Isn’t it about time for a reunion show?!

Read: Victoria Jamieson’s Roller Girl should be on the bookshelf of every girl who dreams of being a Rose City Roller.  Jamieson’s not just a cartoon chronicler of Portland’s roller derby scene — she’s a roller girl herself, skating as Winnie the Pow.  Roller derby saved her soul too; you can read some comics about her discovery of derby at her site.