It’s not often The Shining meets Tony the Tiger meets The Grinch meets hipster drum solos, but this week, they all do meet up for a delicious hot cocoa and a rockin’ sing-along around the fire at a 1940’s Timberline Lodge.

And, that, my friends, is where Raider/Contributor Phil Oppenheim takes over…

Picture the Timberline Lodge in December, with its famous drifting snowbank reaching up to the second story windows.

Scrooges and Bah-Humbuggers picture the scene and look forward to re-watching Stanley Kubrick’s The Shining, filling their fireplace stockings with madness, creepiness, and horror.  Well, there’s none of that here this week!  Instead, we’ll be putting on our ugly sweaters, warming up our hot cocoa, and getting ready to sing beside warm hearths and hearts.

In 1941 Universal Studios released the short subject Jingle Belles, a two-reel musical salute to the holiday season, highlighted by performances at Mt. Hood’s iconic Timberline Lodge — and, unfortunately, I can’t find a copy of that film to share (yet!).  That’s the bad news. 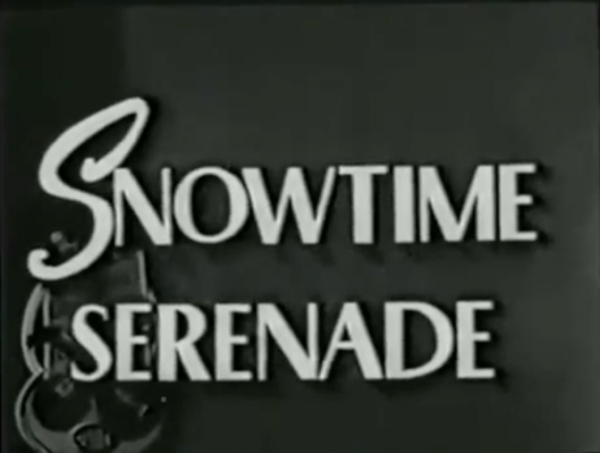 Eight years after Jingle Belles’s release, Universal had acquired Castle Films, a company that had built itself on foundation of selling 8mm and 16mm films to the home movie collector; short films were suddenly (if briefly) a hot commodity, with a projected viewing audience of “not less than 20,000,000 a year.”  All of which brings us to the good news: Universal execs saw the wisdom of re-releasing an edited version of the Timberline treat, now re-titled Snowtime Serenade, and after years of sales in the consumer market and many runs on local TV stations over the decades, it’s also available on YouTube for all of us to enjoy.

Singer Gloria Jean is the star here, whose smiley rendition of “The Sly Old Gentleman” segues via the magic of a blustery dissolve into synchronized skiiing and skating on and around the slopes of Mt Hood.  We all get to warm up in the Timberline Lodge with performances by the close-harmony trio Lee, Lynn, and Lou, the bopping jazz of The Milt Herth Trio, the goofily polkariffic Alpine Octet, and the dapper fellows of The Sportsmen.  It’s all good fun, and guaranteed to put you in the mood for the holidays.

What’s most fun and surprising to me is how often Snowtime Serenade’s season’s greetings swing.  That’s in part thanks to Milt Herth’s cool Hammond organ and O’Neill Spencer’s hip drumming, which free the festivities to cut loose.  I’m sure you’ll wish there were more of the Milt Herth Trio on this too-short short, but you can satisfy your ears’ craving for more with the Trio’s version of The Dipsy Doodle (with an O’Neill vocal!) and the fantastic Fuzzy Wuzzy (“Fuzzy Wuzzy wasn’t fuzzy … was he?).  And the “girl singers” Lee, Lynn, and Lou do their part to keep the party swinging with their version of “Winter Wonderland”; if you need more of their work in your life—and you know you do—check out sisters Lee and Lyn’s hep harmonizing on Bob Crosby’s “When You Think of Loving, Baby, Think of Me.”

Lastly, while you’re humming along to the Fireside Medley as performed by The Four Sportsmen, pay special attention to the lanky, mustachioed fellow on the far left singing bass.  He’s the one and only Thurl Ravenscroft, famous for being the voice of Tony the Tiger but beloved by generations of fans as the singer of “You’re a Mean One, Mr. Grinch.”  He’s grrrrrreat!

Visit: The Timberline Lodge celebrates the holidays with special, fancy multi-course meals.  Christmas Eve is already sold out, but if you hurry you can book yourself for Christmas Day and/or New Year’s Eve!

Dance: If you’re inspired by Snowtime Serenade to try a little Schuhplattling for yourself, stop by the Tirolean Dancers of Oregon Facebook page.

PS for you Grinchy, Scroogey types (you know who you are):  If you’ve absolutely got to buzzkill the Christmas cheer and see The Timberline in its most famous role, as The Overlook Hotel, you’ll be glad to know that The Shining is available for a $2.99 rental from iTunes, GooglePlay, Amazon, and Vudu.