After a shortened week last week RotLA returns today with the final installment of its Noirvember sub-series. This time, it’s a moody and realistic dive into Portland’s not-too-distant but oh-so-different past featuring understated performances, quietly iconic locations and an it-sneaks-up-on-you tension – passing by not only RotLA’s humble narrator’s own Hollywood neighborhood but also The (great) Laurelhurst Theatre in the process finally culminating under the Morrison Bridge outside (where else?) City Liquidators.

One of the great things to celebrate about Oregon’s film history is its direct connection to Indie Directorial Voices and how they have influenced the mood, style and substance of many of the nation’s great cinematic trends; James Blue, James Ivory, Gus Van Zant, a transplanted Alex Cox and many of those highlighted by our Raider/Contributor in past posts – not to mention the pioneering animators and illustrators who literally changed the face of both commercial and experimental animation on all levels. This week is no exception as Phil Oppenheim bundles us up and dives in to Aaron Katz’s Cold Weather. 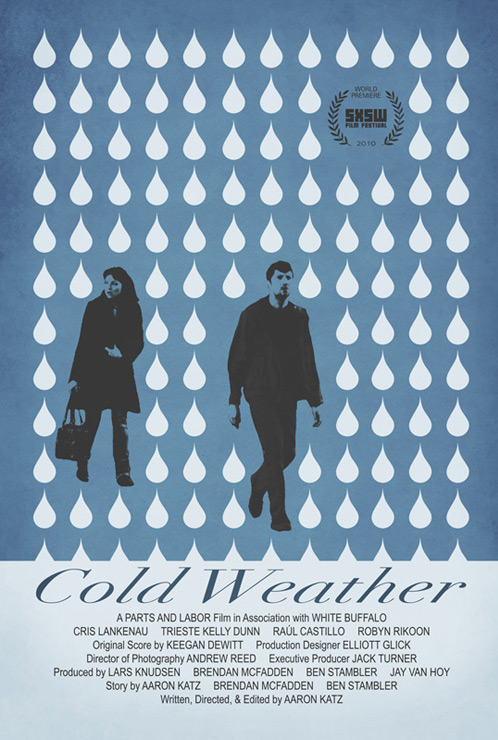 Philip Marlowe had his rumpled raincoat and fedora; Sam Spade had his Maltese Falcon; Mike Hammer had his fists and his 45; Batman has his batarangs and Batmobile.  In writer-director-editor Aaron Katz’s Cold Weather, wanna-be detective Doug has his sister’s Subaru station wagon.  It’s a film noir, but not like any other you’ve seen before.

For those unfamiliar with the director, Aaron Katz had been heralded as one of the leading lights of the once-trendy genre of “mumblecore” in the early aughts.  Mumblecore referred to a set of films characterized by naturalistic dialogue and performances (often by nonactors and other average folks), cheap production values, and peopled by middleclass white young adults talking (and talking and talking) about everything except their own emotional problems; it was less a genre of film than a buzzy marketing category that collected several fellow traveler filmmakers, none of whom embraced (or even liked) the term “mumblecore” (fans can nod along in recognition of titles like Frances Ha, The Puffy Chair, Funny Ha Ha Humpday, et al).   By the end of the cycle, though, the “genre” was criticized as a bubble of hype, the films as self-indulgent and boring, and the filmmakers as a bunch of affluent white guys talking about affluent white guys (for an excellent example of the anti-mumblecore backlash, see Amy Taubin’s piece in Film Comment).  The directors of the “movement” ultimately turned away from the stereotypical tropes with which they were identified, with mumble-movie makers like Andrew Bujalski turning towards trippy period puzzles (his nerdtastic early-‘80s video brainteaser Computer Chess), Joe Swanberg assembling his thirty-something half-hour sex dramedy series for Netflix, Easy, and Mark Duplass’s embrace of horror in Creep and Creep 2.

Katz’s films were always an uneasy fit within the supposed genre though.  Katz’s characters were more fully drawn, and less caricatures of inarticulate ‘90s “whatever” ennui; his films’ naturalism felt more complex, emotional, and real (rather than affectedly “authentic”).  He experimented with digital cameras (using the Red One for Cold Weather), giving his movies a crystal clarity that was markedly different from his peers’ hazy aesthetic playbook  (if there were such a playbook).  As a result, then and now, Katz was seen as something of an anomaly, a mumblecore filmmaker who was reaching beyond the confines of his genre for something more substantive and personally expressive (and we’ll look at his breakthrough pre-Portlandia teen drama Dance Party USA as an example of his ambitiousness, in a future Raid).

In Cold Weather, Katz matches natural-seeming dialogue and a slow-burn “realistic” plot with an unexpected crime-thriller plot, making a MumbleNoir movie.  For a long while, Cold Weather seems to settle into a mild quarter-life crisis flick in which almost nothing happens at all, other than our following a underachieving, and overeducated young Portlander Doug (Chris Lankenau) settle for an undemanding job at an ice factory (played by The Dalles’s Gem Ice factory) and putting his college dreams of using his criminal justice degree and the rest of his adulthood on, well, ice.  About a half-hour into the film, though, a fresh mystery rips into his bored complacency: his ex-girlfriend, Rachel (Robyn Rikoon) who has been visiting from out of town, disappears from her hotel room without a trace.

Soon Doug forms an ad hoc Scooby gang with his sister Gail (Trieste Kelly Dunn) and his coworker pal Carlos (Raúl Castillo) and enters a film noir world of online pornography, stolen money, and crime-world thugs.  Doug buys himself a pipe to channel his literary hero Sherlock Holmes, and the game is afoot.  Katz strikes a balance between creating a Hipster Hardy Boys and a small-scale character piece, as Doug slowly becomes more self-actualized and integrated into the community of his family and friends; the slacker Sam Spade participating in a thrilling heist and car chase along the way (which is a welcome change from his napping on the couch, for both him and us).

A key component of the film’s charm is its humble Portland setting, and like many films noir, the City itself factors in as one of the movie’s characters.   Portland (circa 2010) mirrors Doug’s likeably unassuming personality; unlike more threateningly dark cities like New York, Chicago, or Los Angeles (in both classic and neo-noirs), Portland is caught in the grays of its Cold Weather season, with storm-cloudy skies both evoking the rains of films noir from Detour (1945) all the way through Blade Runner (1982) and its sequel, and distinguishing itself from them by its relatively gentle drizzle.

The physical features Katz decides to include also focus on personal, human-scale landmarks – not Empire State Buildings and Golden Gate Bridges, for example, but factories, bus stops, overpasses and alleys, and streets (some featureless buildings at the intersection of SE Brooklyn Ave. and SE 16th Ave. figures prominently, for instance).  And in full disclosure, I must admit to being personally delighted by seeing so much of my own Hollywood neighborhood preserved for indie posterity, with the U-Store Self Storage building, the Broadway Cigar Company, and the Gross Out (aka Grocery Outlet) all getting screen-time.  Cold Weather relies on Portland’s humble landscape for its muted thrills; it also unwittingly serves as an excellent time capsule, capturing its pre-Portlandia prime (Fred and Carrie wouldn’t be putting a bird on the city for a year after Cold Weather’s release).

Thanks to Katz’s use of its winningly bedraggled indie cast of relative unknowns, its realistically slow-burning plot, its familiarly naturalistic dialogue, and hyper-local locations, Cold Weather turns the darkness at the center of traditional film noir inside out; instead of being “awfully cold around the heart” (as Robert Mitchum puts it in the classic noir Out of the Past), the surprising Cold Weather turns out to be warm-hearted, sweet-natured, and even life-affirming (albeit in a very ironic, hipsterish way).

Aaron Katz’s newest film – like Cold Weather, another acclaimed South by Southwest premiere – is Gemini, which will hit theaters during the Spring of 2018.  Once again, Katz takes noir and detective tropes and combines them with a knowing, loving sense of place (this time, though, in Los Angeles).  Gemini was one of the most talked about movies at SXSW, and successfully navigated a bidding war for a deal with the super-cool movie distributor Neon.  It’s a fantastic movie, and sure to be a critical favorite in 2018.  I wouldn’t be surprised if it’s one of the films you’ll be talking about at the end of next year as award season approaches; see if you can resist the urge to tell your friends that – like Portland itself – you were into Aaron Katz’s movies before it was cool to be …

Watch: Cold Weather is available on DVD from Sundance Selects.  The additional features include a brief alternate ending that features even more Portland landmarks, including Pioneer Square, secret staircases, glimpses of the Fremont Bridge, and more.  It’s a fitting (if brief) travelogue, and a worthwhile coda to screening the film proper.

Visit: Part of Cold Weather’s tension-filled finale takes place under Portland’s Morrison Street Bridge, at Le Bistro Montage.  You’ll definitely want to treat yourself to the city’s favorite macaroni and cheese after you watch the movie.  Just remember to keep your possessions near you at all times.

Listen: Composer Keegan DeWitt (originally from Bend) collaborated with Aaron Katz on other films (Quiet City, Dance Party USA, Land Ho!).  If you like his gentle, understated work in Cold Weather, you’ll want to check out his other projects at his website.  DeWitt generously offers lots of music to listen to, including the entire soundtrack to Land Ho!