This week’s trek into Oregon’s dark and eclectic cinematic woods marks a (literal) transition from “Back to School” to a month of horror themed posts leading up to Halloween. Raider/Contributor Phil Oppenheim is calling this slashy little sub-series “Horregon.” In this installment, we find ourselves with not only a pre-Star Wars (post-American Graffiti) Harrison Ford but also a pre-Stripes (post-Carrie) PJ Soles skulking around a dimly lit (and therefore mostly unidentified) Reed College campus trying to soak up some of the devil’s blood left behind in the boffo box office red wake of The Exorcist. 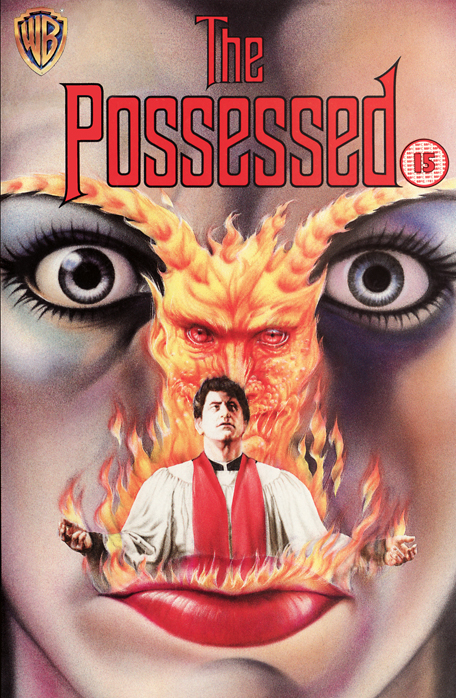 Reed College has plenty to brag about, including a beautiful campus with stunning buildings designed by A.E. Doyle, rigorous admission standards (mean SAT scores of 1387, 39% acceptance rate), and many notable alumni, including Steve Jobs (its most famous dropout), James Beard, Ry Cooder, Larry Sanger, and trash-culture trailblazer and my own personal hero, Dr. Demento (Barry Hansen).  And while their Religion major currently includes interesting-sounding classes covering Early Imperial China, Ancient Christianity, Islam, Judaism, Hindusim, and Sufism, they might want to consider adding Luciferianism, Women’s (Satanic) Studies, and Practical Exorcism into the mix for the spring semester — at least if the 1977 TV movie The Possessed is to be believed.

According to the film, it appears that Reed has a devil of a problem.  Or to be more accurate, it’s the “Helen Page School,” an all-girls prep school (whose campus is played by Reed in the film’s locations), that finds itself in need of an exterminator.  Or to be more accurate again, it needs an exorcist: The Possessed is a watered-down ripoff of the 1973 cultural phenomenon The Exorcist (Friedkin’s film had been the highest grossing horror film for the last 44 years — until the current Stephen King smash It broke its record last weekend).  As Grady Hendrix explains in the fantastic new book Paperbacks From Hell, the early ‘70s saw three explosively popular novels — The Exorcist, The Other, and Rosemary’s Baby — usher in an era of so many occult-themed books and movies that an observer might think that the whole country had been lured over to the Left-Hand Path (which at least is one explanation for the Nixon Administration and leisure suits).  The network ABC thought that this was a bandwagon well worth hopping onto, and commissioned this film as a pilot for a demon-of-the-week exorcist-centered series.

Kevin Leahy (played by a furrowed-browed James Farentino, later an Emmy nominee for his portrayal of Saint Peter in the miniseries Jesus of Nazareth) is an alcoholic priest who finds himself with a new calling after a near-death experience at the start of the film: he’s going to wander the country, performing exorcisms wherever he’s needed (presumably he’s got the Yellow Pages listing all to himself); one imagines the studio buying the pilot after hearing a pitch that included “It’s The Exorcist meets Kung Fu!” (full disclosure: I would so watch that show).  When Helen Page’s Headmistress finds herself with a rash of inexplicable fires popping up all over campus (typewriters, drapes, and graduation gowns all burst into flames), Leahy appears on the scene, sniffing around for the smell of sulphur.

While it’s not a surprise that he ultimately finds the Devil on campus, it is surprising how long it takes him to figure it out in whom he’s hiding.  Exploitation movie fans usually demand the promised thrills for particular kinds of movies to appear quickly and consistently throughout their movies, but The Possessed might better be titled “The Tease of the Possessed,” because the actual vomit-spewing, Devil-voiced possession scene takes really only takes place in the last seven minutes of its running time.  If you’re a stickler for delivering on generic requirements for Exorcist-ripoff films, you may find yourself disappointed.

If you’re more, uh, catholic in your exploitation film taste, you’ll be glad to know that The Possessed possesses enough sleaziness to keep your interest.  What makes the film especially fun is that it operates within the relatively rigid standards of ‘70s television, which means that it has to maneuver its tawdry aspirations through constraints that prohibit nudity, language, or bodily gross-outs (that is, the stuff that got The Exorcist an R theatrical rating in 1973).  John Sacret Young (acclaimed writer for China Beach, The West Wing, and many others) penned a screenplay that navigates around all of the network’s standards protocols, working its way via innuendo rather than explicitness (and thus often making it feel even ickier).

It’s not long before the girls’ school setting is mined for its lurid potential, for example.  In particular, it turns out that the Headmistress has been having a fling with a (male) professor, a hunky professor of biology (what else?) named Mr. Winjam, who is simultaneously engaged in an inappropriate (and probably illegal) physical relationship with her friend’s daughter, a student at the school (as you’d expect, the girl gets “punished” for her carnal sins by bursting into flames, an example of anti-sex horror movie morality).  The most enjoyable part of the movie is that this disreputable Lothario is played by Harrison Ford (!); The Possessed premiered three weeks before Star Wars opened in theaters, instantly cementing his role as one of Hollywood’s most durable leading men (and guaranteeing that he wouldn’t appear in TV movie schlock ever again).  Here, though, Ford does his best to be as slimy as possible, leering at and seducing teenage girls, dumping age-appropriate women when he tires of them, and propositioning an entire classroom of jailbait students by offering to pay them $1 if they’ll touch a jar holding a lethal spider (it’s a creepy sex scene without the sex, a TV censor-friendly version of an Indecent Proposal).  Ford’s character has a devil-may-care attitude towards conventional morality — too bad for Mr. Winjam, as it turns out that the Devil does care. A lot.

The movie’s biggest sin, though, is not its depiction of devilish “concupiscence in girls” (in the words of lecherous Mr. Winjam), but in the wasted performance of one of its stars.  PJ Soles — who played Norma Watson in De Palma’s Carrie the year before The Possessed premiered and in the years afterwards Lynda van der Klok in Carpenter’s Halloween and Riff Randell in Arkin’s Rock ’n’ Roll High School — plays one of Helen Page’s students, and she’s given virtually nothing to do.  Soles stands around with the other girls, occasionally looking surprised when something or someone bursts into flames, emitting only a tiny half-shriek once or twice during the film.  Movie buffs who love Soles (and we are legion — am I right, Stripes fans?)  might find themselves, by the end of The Possessed, fantasizing about some demonic retribution visited upon the TV movie’s makers too.

Watch: The Possessed, on DVD from the Warner Archive Collection.

The Possessed doesn’t work very well as a travelogue for Reed College (it is supposed to be incognito, after all), and most of the movie involves students and faculty running around dark, underpopulated dormitories late at night.  The exteriors of Eliot Hall (built in 1912) figure fairly prominently in the story, as does the Old Dorm Block (also 1912); there’s a pivotal scene that takes place in what I’m guessing is the Watzek Sports Center (1965) — but I bet Reed alums will spot more locations with greater accuracy and detail.

For more information about A.E. Doyle, the architect responsible for the signature buildings and master plan of the Helen Page School — oops, I mean Reed College — visit the fascinating and informative essay “Architect for a Golden Age” by Catherine Hinchliff (class of 2010, and currently a doctoral candidate in History at Johns Hopkins).