“Big data demands to be seen on the big screen”

The first screening of its kind — “Arc” is a theatrical program dedicated to the art, creativity and complexity of animated infographics. As its name suggests, the screening lies at the confluence of storytelling and data visualizations — an intersection that will be appeal to interaction designers, journalists, writers, researchers, number-junkies and analysts. 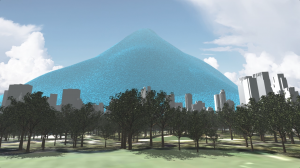 In a culture now supersaturated with colossal reams of information, it’s all we can do to stay afloat and make sense of it all. With a demand for interpretation, and new tools for doing so, we’re experiencing a fresh breed of visual artists crystallizing this influx of information into beautiful visualizations and stories. No longer traditional craftspeople, these artists are hybrid, interdisciplinary teams composed of designers, motion artists, analysts, strategists and engineers, whose canvas is most frequently the Internet. This program collects the best and brightest time-based data visualizations and infographics from the past couple years with a focus on story-driven data.  To be followed by a panel with Andrew DeVigal (Second Story, NYTimes) and Dino Citaro (Periscopic.com).