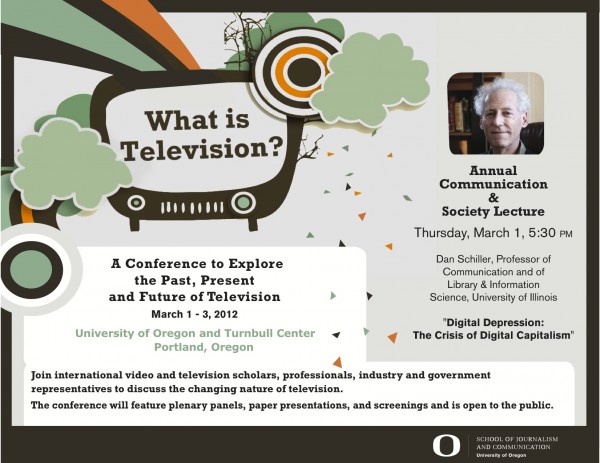 From March 1 through 3, 2012, these questions will be explored during a unique gathering of television and video industry professionals, media scholars and students, and government and community officials during the “What is Television” conference.

The New York Times recently reported that young people are using other devises to watch TV: “Television is America’s No. 1 pastime, with an average of four hours and 39 minutes consumed by every person every day. But more and more young people are tuning in elsewhere. Americans ages 12 to 34 are spending less time in front of TV sets, even as those 35 and older are spending more…” In addition, innovations like Internet-ready and 3D TVs have recently hit stores, and rumors abound that Apple is working on a game-changing TV set.

Hosted by the University of Oregon School of Journalism and Communication, the event will feature plenary sessions, international paper presentations and screenings in an attempt to answer questions about the changing nature of television.

The conference is open to the public. Online registration plus program details are available at http://journalism.uoregon.edu/whatistv/.

“For television, change is everywhere. Content is now produced using a wide range of digital technologies, distributed via the Internet, mobile devices and a variety of video formats, and viewed at the convenience of consumers. But even with these alterations, it can be argued that television remains as significant as ever,” said Tim Gleason, Dean of the University of Oregon School of Journalism and Communication. “This conference will bring together television professionals and scholars to explore television on the digital age, where it is heading, and what it means for producers and consumers alike.”

Confirmed speakers to date include:

The conference will open on March 1 at 5:30 pm with the Third Annual Communication and Society Lecture. The keynote speaker is Dan Schiller, Professor of Communication and of Library & Information Science, University of Illinois, who address “Digital Depression: The Crisis of Digital Capitalism.”

The “What is Television” conference will be held at the University of Oregon’s George S. Turnbull Portland Center, located in the historic White Stag Block of the city’s Old Town Chinatown. The Turnbull Center is the UO School of Journalism and Communication’s base in Portland, the state’s media center. For more about the Turnbull Center, visit http://turnbullcenter.uoregon.edu/about.

About the University of Oregon School of Journalism and Communication

The University of Oregon School of Journalism and Communication (SOJC) produces outstanding writers, editors, digital media makers, strategists, and critical thinkers by providing a program rich in ethics, innovation, and social responsibility. Students hone their skills while participating in award-winning student media such as Flux, Mosaic, and Oregon News, and more than 10 student groups, including Allen Hall Advertising, Allen Hall Public Relations and the National Broadcasters Association. In addition to learning from an accomplished and diverse faculty, students have unparalleled opportunities to network and learn from experienced industry professionals. The SOJC hosts the annual Journalists- and Executives-in-Residence programs, as well annual events including the Ancil Payne Awards for Ethics in Journalism, the Hulteng Conversations in Ethics, and the annual Johnston and Ruhl Lectures. The school counts nine Pulitzer Prize winners among its more than 9,000 graduates. journalism.uoregon.edu